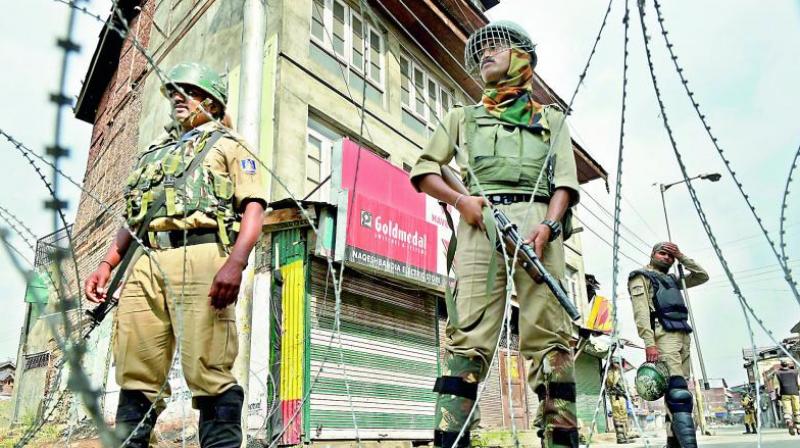 Police sources said the additional sandbag bunkers and pillboxes have been set up in Srinagar and other towns mainly to contain public protests and stone-pelting by local youths.

Srinagar: The security forces have laid new sandbag bunkers and pillboxes in Srinagar and other major towns of Kashmir over the past couple of weeks, apparently to strengthen their grip over the ground situation in the restive Valley.

About two dozen such fortifications have come up at street corners and on the edges of roads in Srinagar city alone. The Central armed police forces carrying a variety of firearms and hi-tech equipment have also set up a large number of makeshift checkpoints and drop gates in addition to the existing ones all over the summer capital. The roads linking Srinagar with the district headquarters also see extraordinary presence of security forces in daytime, whereas the pillboxes and bunkers set up at short distances are manned by them round-the-clock.

The Centre had rushed in tens of thousands of additional forces, mainly the CRPF, , Border Security Force, Sashastra Seema Bal (SSB) and Indo-Tibetan Border Police (ITBP), days before stripping J&K of it special status under Article 370 of the Constitution and splitting the state into two Union territories in the first week of August.

Police sources said the additional sandbag bunkers and pillboxes have been set up in Srinagar and other towns mainly to contain public protests and stone-pelting by local youths. However, besides security personnel, police sharpshooters too have been deployed at such new as well as old ramparts for a quick and proficient response in the event of militants launching attacks. A large number of such bunkers and pillboxes had been removed from Srinagar after an improvement in the security situation about six years ago.

The sources said the top security brass reviews the ground situation in the Valley and in Jammu on daily basis at meetings held routinely in the evenings and sometimes in the mornings as well. One of the officials actively involved in this exercise is K. Vijay Kumar, adviser on security to the governor.

Mr Kumar, a retired IPS officer, has served as the chief of the Special Task Force of Tamil Nadu that was involved in the death of sandalwood smuggler Veerappan during Operation Cocoon of 2004. He was also a senior adviser to the home ministry for the Left-Wing Extremism areas.