At the same time, Kannadigas also agreed not to harm Maratha emperor Chatrapati Shivaji statue situated at the venue. 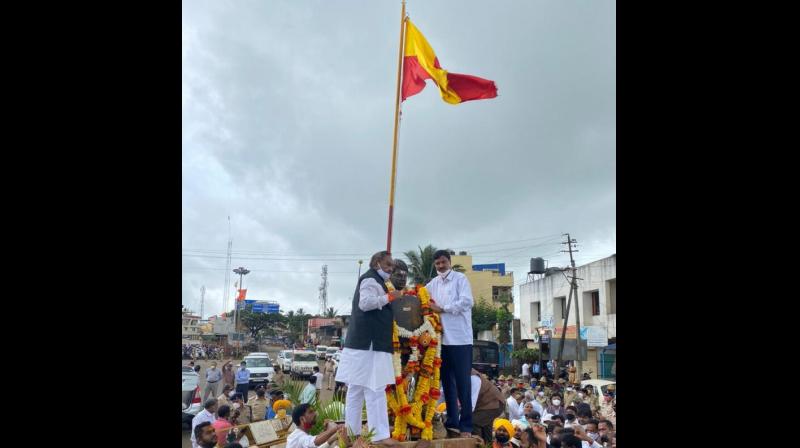 Hubballi: The dispute between Kannadigas and Marathas over statue installation in Peeranawadi village of Belagavi taluk has been settled amicably with the intervention of district in-charge minister Ramesh Jarkiholi and additional director general of police Amarkumar Pande.

Marathas have agreed not to remove Rayanna's statue installed by Kannadigas at Peeranwadi circle on Friday morning. At the same time, Kannadigas also agreed not to harm Maratha emperor Chatrapati Shivaji statue situated at the venue.

Rural development and panchayat raj minister KS Eshwarappa, who visited disputed place on Saturday, has assured that he will persuade home minister Basavaraj Bommai to withdraw the cases lodged against both Kannada and Marathi activists over the issue.

Garlanding Rayanna's statue, Eshwarappa expressed happiness over early settlement of the dispute. He also said that both Rayanna and Shivaji are great patriots who grown beyond caste barrier.

"Many people had fought for installation of freedom fighter Rayanna's statue. Their dream has been met today after lot of struggle. Resolving the dispute between both Kannadigas and Marathas has set a role model to the entire nation," said Eshwarappa who also garlanded Shivaji statue on this occasion. Both groups also agreed to name the disputed circle as Shivaji circle as it has been called till date.