India   All India  29 Aug 2020  Row over freedom fighter's statue turns into Kannadiga vs Marathi issue in Belagavi
India, All India

Tensions erupted in the village when a group of Kannada activists barged into the venue to install Rayanna statue at 3.30 am on Friday 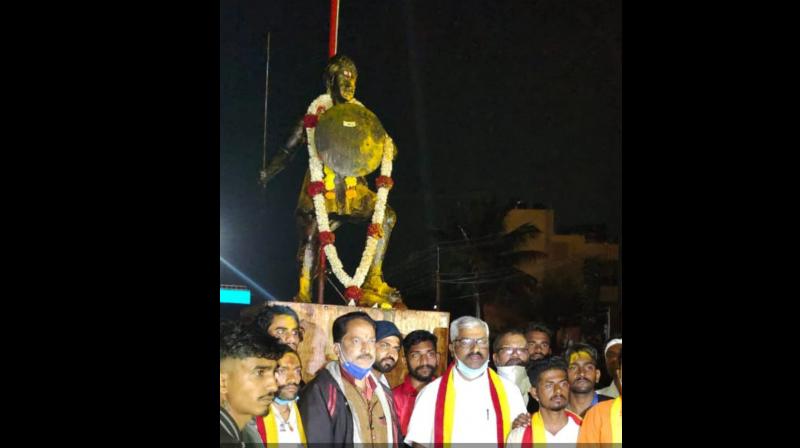 Hubballi: The tussule between Kannadigas and Marathi people in Belagavi has resurfaced in the form of a statue row this time. Kannadigas are demanding installation of the freedom fighter Sangolli Rayanna's statue at a circle in Peeranawadi village situated at the outskirts of Belagavi, while Maratha-speaking people urging the government to install the Maratha emperor Shivaji's statue at the venue.

Tensions erupted in the village when a group of Kannada activists barged into the venue to install Rayanna statue at 3.30 am on Friday, forcing the police officials to resort to laticharge against the irate Marathi-speaking people who staged protest by pelting stones.

The Kannada activists had made a similar attempt at an unauthorised installation of Rayanna statue on August 15. But, police officials had stopped their attempt when Marathi-speaking people opposed the move and demanded removal of the statue from the venue. Police had also taken the Rayanna syatue into their possession.

The Marathi-speaking people are contending that a Shivaji statue is already there near the circle and installing the Rayanna statue at Shivaji circle will create confusion in the minds of people visiting the village.

The statue row between Kannadigas and Marathas has been posing a tough challenge to the government and politicians, especially those who hail from Kuruba community to which Rayanna also belonged. Some Kannada activists are targeting rural development and panchayat raj minister, Kuruba leader K S Eshwarappa, who tried to mobilise the community by launching Sangolli Rayanna Brigade to showcase his strength to his rivals within BJP and Opposition parties. The minister will visit Belagavi on Saturday to find a solution to the issue through negotiations with both groups.

"Pro-Kannada organsations are demanding the district administration and government since last 4-5 years to install Rayanna statue at the venue. But our demand is not fulfilled despite submitting several memorandums to the local elected representatives. Therefore, we decided to instal the statue on Friday morning," senior Kannada activist Ashok Chandaragi said.

The security has been beefed up as tensions continued in the village. Home minister Basavaraj Bommai has directed senior police officials in Bengaluru to visit the village to supervise security arrangements.

Meanwhile, the Kannada activists have staged a protest by holding a procession from administrative building of Suvarna Soudha to the office of the Belagavi deputy commissioner. The district in-charge minister Ramesh Jarkiholi also held meetings with officials and assured the Kannada activists that row will be resolved soon.