His wife, Rujira Banerjee Narula, has also been summoned by the ED 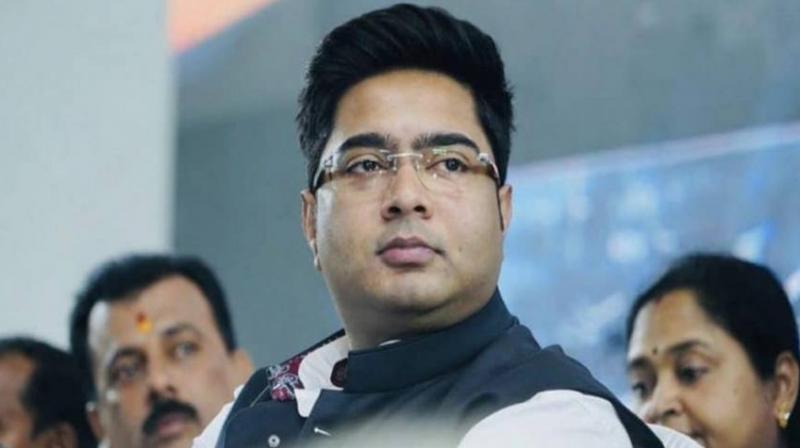 Banerjee has been asked to appear at the ED headquarters in New Delhi on September 6. (Photo: PTI)

Kolkata: For the first time, West Bengal chief minister Mamata Banerjee's MP nephew, Abhishek Banerjee, has been summoned by the Enforcement Directorate (ED) for questioning in a case under the Prevention of Money Laundering Act (PMLA) over the coal smuggling scam.

The Diamond Harbour Trinamul Congress MP, accused by the BJP of benefiting from the scam through his cohorts in state police, has been asked to appear at the ED headquarters in New Delhi on September 6.

Significantly, the Central agency's notice to the new TMC national general secretary comes at a time when he is determined to establish his party in the BJP-ruled Tripura. His wife, Rujira Banerjee Narula, has also been summoned by the ED. She has, however, been asked to appear on September 1.

In February, Ms Narula and her sister, Menoka Gambhir, were grilled by the anti-corruption branch of the CBI in the case after BJP leader Shubhendu Adhikari claimed that Anup Majhi, the kingpin of the coal smuggling case, used to deposit around Rs 36 lakh daily in the Kasikorn Bank account of "Madam Narula" at Bangkok in Thailand.

According to the ED, the PMLA case was registered on the basis of an FIR filed by the CBI in November last year over allegations of coal pilferage running into crores at the Eastern Coalfields Ltd mines in Kunustoria and Kajora areas of Asansol in Burdwan West.

Exploding in fury over the ED summons, the TMC supremo and her nephew attacked Union home minister Amit Shah on Saturday.

In her virtual address at the foundation day celebration of TMC students' wing, Ms Banerjee wondered aloud, "Why would TMC only be caught in the coal theft? Coal is not under TMC. It is the responsibility of the CISF which is under the Central ministry and not the state ministry. What was your ministry doing then?"

She claimed, "I can name a dozen ministers who looted Asansol. If anyone is forced to take someone's name, it is not a reply, Amit Shah. During the election, all of your ministers who came here stayed at the hotels of coal mafias. I have the evidence. Who all were lodged at the East West Hotel which was fully booked? Should I flash the list?"

"You abused and insulted women. Don't forget Bengal is a different state. There will be a tit for tat. If you show one finger, 10 more are ready to be pointed at you. Till date I have not been vindictive... Many of your leaders are involved in cases related to women. But I have not ordered their arrests till date. Fight Abhishek and others politically. If you show ED, I can also send a bagful of documents to the same agency for a probe. If a probe does not follow, we will move to court then," she said.

"The TMC will fight till its last drop of blood for the people in Tripura. The day Ms Banerjee will set her feet there, tremors will be felt. Let BJP do whatever it can. Let it try to stop us if it has guts. The more the intimidation by the ED and CBI will be there, the more our resolve will grow. I challenge Union home minister Amit Shah: if you try to stop us in any state, we will snatch it away," she added.

Abhishek Banerjee said, “Ones who think we can be threatened by ED and CBI, our fight will only grow.”

In between the dates of appearance of him and his wife, the young TMC MP's lawyer, Sanjay Basu, has been called by the ED for questioning on September 3. Besides, two senior IPS officers of the state police have also got summons from the ED.

While deputy inspector general (Midnapore Range) Shyam Singh has been asked to appear on September 8, Gyanwant Singh, the state CID chief with additional role as additional director at the directorate of security in charge of the CM's protection, has been directed to appear next day. Gyanwant was earlier questioned by the CBI in the case.