India   All India  29 Aug 2022  Noida's twin towers of corruption razed in under 12 seconds
India, All India

Noida's twin towers of corruption razed in under 12 seconds 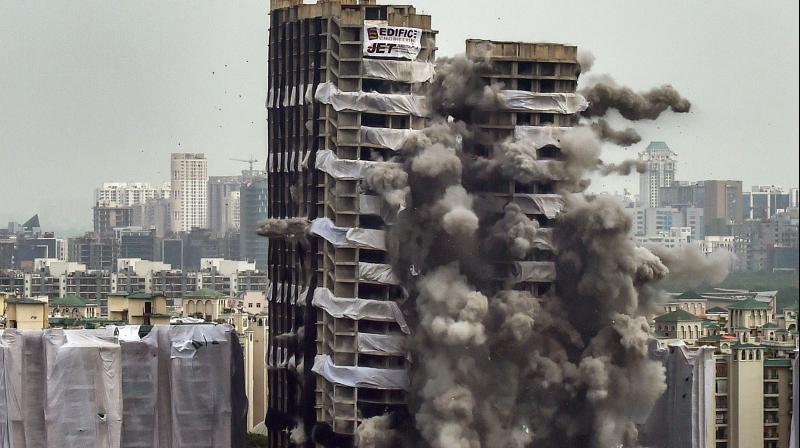 Demolition of Supertech twin towers in Noida, Sunday, Aug. 28, 2022. Over 3,700 kg explosives were used to bring down the structures in pursuance of a Supreme Court order that found their construction within the Emerald Court society premises in violation of norms. (PTI Photo/Manvender Vashist Lav)

New Delhi: Nearly nine years after the aggrieved residents challenged the illegal construction of Supertech twin towers in court, the 100-metre high building that once stood taller than Delhi's iconic Qutub Minar was reduced to dust in under 12 seconds on Sunday.

After a series of controlled explosions, all that was left behind was dust and debris. The towers -- Apex (32 storeys) and Ceyane (29 storeys) -- were brought down in a carefully choreographed and meticulously executed demolition, the biggest such exercise in the country so far.

The hype around the twin towers' demolition ensured that a large number of people from Noida and beyond gathered around the "ground zero" before 2:30 pm, the time fixed for the demolition to be carried out, and watched it implode from various vantage points. Hundreds cheered and clapped as "structures of corruption" came crashing down in what could be a once-in-a-lifetime spectacle, as 3,700 kilos of explosives bored into the pillars and walls of the two residential buildings went off in quick succession.

Around 2.30 pm, the floors of the twin towers, which sat amid other complexes in sector 93A in Noida, collapsed onto each other like a house of cards.

The Noida Authority termed the demolition "largely successful". "The blast has largely been successful. Teams of Edifice, Central Building Research Institute (CBRI), Jet Demolitions are making a physical inspection of the site to see if any leftover explosives are there," Noida Authority CEO Ritu Maheshwari said.

About 5,000 people from the adjoining societies -- Emerald Court and ATS Village -- had left their homes hours before the demolition. Nearly 3,000 vehicles and about 200 pets were also taken out of harm's way. Even the stray animals, including at least 40 stray dogs, living in and around the now demolished towers were shifted temporarily to shelters run by NGOs.

Though the boundary wall of a nearby society was damaged and windowpanes of some flats developed cracks, no apparent structural damage to the high-rises next to the demolished towers was reported, despite the fact that the closest residential complex was just nine metres away.

Officials said the demolition of nearly 100-metre-tall structures conducted by the "waterfall implosion" technique has left an estimated 35,000 cubic metres or 55,000 tonnes to 80,000 tonnes of debris, including concrete rubble, steel and iron bars, that would take three months to be disposed of.

An official said water sprinklers and anti-smog guns were activated at the site soon after the demolition to help contain the dust.

The doctors, however, said people living nearby, especially those suffering from respiratory diseases, should take extra care and avoid the area for a few days if possible.

A team from Edifice Engineering and South Africa's Jet Demolitions carried out the challenging task.

The company officials also performed puja in the morning to ensure the safe demolition of the buildings. "We are all super excited and confident that nothing will go wrong. We are ready. We have spent weeks preparing for it," said blast specialist Cethan Dutta, who pressed the button to commence the explosion.

In its order for the demolition of the twin towers, the Supreme Court had pointed to the "collusion" between the builders and Noida Authority officials who allowed Supertech Ltd to carry out construction in an area where no buildings were allowed according to the original plans.

The Noida CEO expressed confidence that this case will serve as a lesson not only for builders but also for government officials.

The realty firm Supertech incurred a loss of around `500 crores, informed company chairman R.K. Arora, and added that the company paid `20 crores for the demolitions.

However, over 200 homebuyers from different projects of Supertech, who are fighting a legal battle against the builder seeking a refund of the payments made, felt dejected and poured their frustration out on social media.

The onlookers, though, were more interested in the spectacle.

"It felt like structures of corruption were coming down," said a spectator, who watched the demolition.

Ashish Suman, who came from Delhi's Uttam Nagar to witness the demolition, said, "It was worth it."

The social media also exploded with amusing comments, hilarious memes and dark humour. People across the country were glued to their TV sets to watch the mega demolition event.

At about 2:30 pm, the twin towers literally became history by becoming the tallest structures to be demolished in India.