“The effect has been more pronounced near Baralacha La and along the road from Killing-Sarai to Bharatpur,” he said. 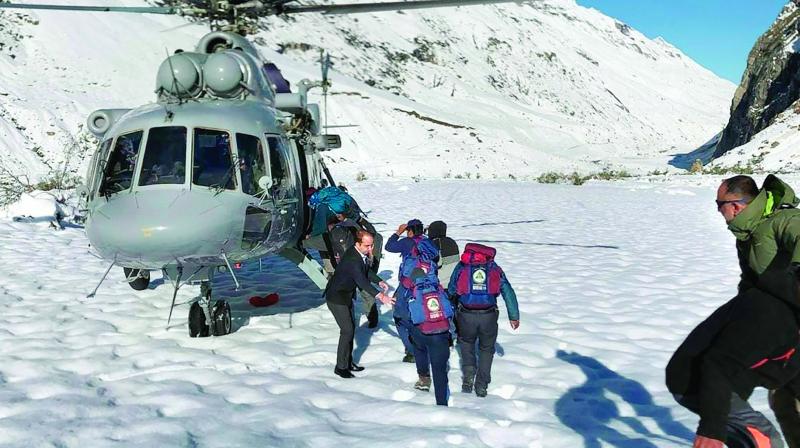 Srinagar: The Army on Friday said it rescued 168 civilians including foreign tourists who had been stranded along the 490-km Leh-Manali highway following heavy snowfall and rains in the region.

A defence spokesman said that large number of landslides and snowslides trapped vehicles along the strategic axis during past one week. “The effect has been more pronounced near Baralacha La and along the road from Killing-Sarai to Bharatpur,” he said.

The spokesman Colonel Rajesh Kalia said that a highly specialised and trained avalanche panther rescue team of Ladakh Scouts has been inducted into the affected area for rescue and relief operations. “A second avalanche rescue team is also being inducted shortly,” he said adding that one officer each from the Army’s medical signals corps have been deployed at Patsio for providing medical assistance and making communication arrangements to the stranded civilians

“In addition to this, medical stores, oxygen cylinders, supplies and rations have been airlifted by Army Aviation into the affected areas”, he said. He also said that among the 124 civilians rescued by the Army included 31 Bhutanese and 38 Nepalese nationals and rest were Indian tourists. “They were evacuated from Bharatpur to Sarchu and provided medical aid, shelter, warm clothing and hot meals. In addition, 22 civilians including two Australian nationals present near Sarchu were rescued and provided medical aid. A vehicle cum foot patrol launched from Patsio to Suraj Tal evacuated 95 civilians and brought them to Patsio. They have been provided immediate medical aid, shelter and warm clothing. Army detachments are also clearing the road wherever civilian vehicles have been stuck,” he said.