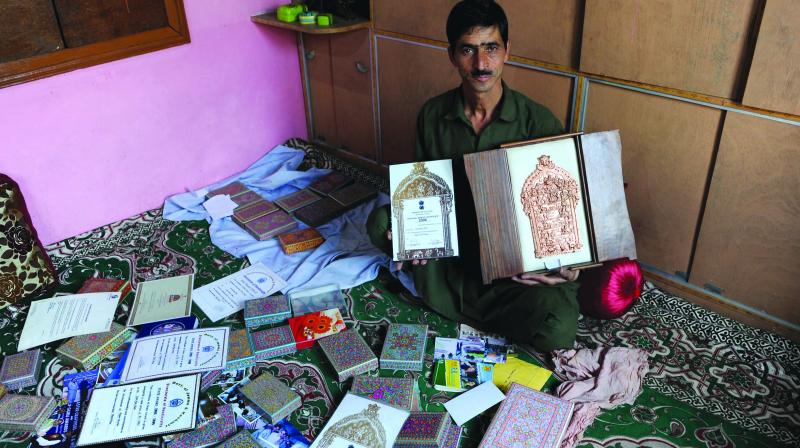 Srinagar: The government offers various incentives, scholarships schemes and grants to promote arts and culture across the country. But these are not actually delivered to all the deserving and needy. Syed Ajaz Ahmed Shah in Jammu and Kashmir is one of the indigent.

“The papier-mache sector of Kashmir arts has been totally ignored by the government resulting into its virtual failure. Since it became increasingly difficult to make a living through it, I decided to drive an auto-rickshaw to support my family,” Mr Shah said.

Mr Shah, now in his early 30s, was very young when he started as a papier-mache craftsman. Within a few years’ time, he evolved into a good artist and soon emerged as a leading figure on Kashmir’s handicrafts scene.

In December 2008, his hard work, artistic skills and talent were recognised at the national level when he received the National Award for the Mastercraftpersons for the year 2006 from the then President Pratibha Patil. The award initiated by the ministry of textiles consisted of a tamrapatra, a legal document inscribed on a copper plate, a shawl and a cash prize of Rs 100,000.

It was small papier-mache jewellery box made by Mr Shah with utmost care and professional zeal which won him this award. The same brilliant piece of artwork had earned him a state award back home earlier. Mr Shah’s work considered extraordinary rich in the area won him about half a dozen awards at home and abroad.

Papier-mache is a malleable mixture of paper and glue, or paper, flour, and water which becomes hard when dry. Sometimes reinforced with textile, it is used to make boxes, trays or ornaments. Papier-mache literally means “chewed paper”, “pulped paper” or “mashed paper”. In Kashmir where this art was introduced by artists accompanying  Mir Sayyid Ali Hamadani, a 14th century Persian Sufi saint and visionary of the Kubrawiya order, papier-mache has been used to manufacture small painted boxes, bowls lined with metals, trays and cases.

But soon his luck was badly out. His father Syed Ali Shah was diagnosed with bone marrow cancer and the family spent a fortune on his treatment.

Eventually, he was forced to part with the award-winning papier-mache jewellery box as well. He sold it to an exporter for Rs 30,000 along with the certification to pay his father’s medical bills.

Yet the senior Shah could not survive the deadly disease. His death came as a great shock to Mr Shah and the life was never the same again for him.

“This sector has suffered enormously mainly because of the neglect on part of the government. This in turn has forced many craftsmen to shift to other professions,” Mr Shah said.

He himself chose to drivel an auto-rickshaw to earn a livelihood. “I raised money by selling our leftover valuables including gold of my spouse to buy an auto-rickshaw. I would earn a mere Rs 150-200 as a craftsman. Now my average daily income is anywhere between Rs 500 to 700,” he said.

The Kashmiri handicrafts traders and concerned officials say that papier-mache like other once thriving handicrafts of Kashmir has lost the demand it once had in the international market.

Mr Shah expects the government will, at least, help artisans like him by extending financial assistance or providing jobs to them.

Mr Shah, a fifth generation papier-mache artist, says that the art in his family will die with him as the younger generation is not interested in taking it as occupation for it will “push them to starve unless the government comes up with some welfare schemes in this sector”.