In her address to the UN, External Affairs Minister Sushma Swaraj described terrorism as an 'existential threat' to humanity. 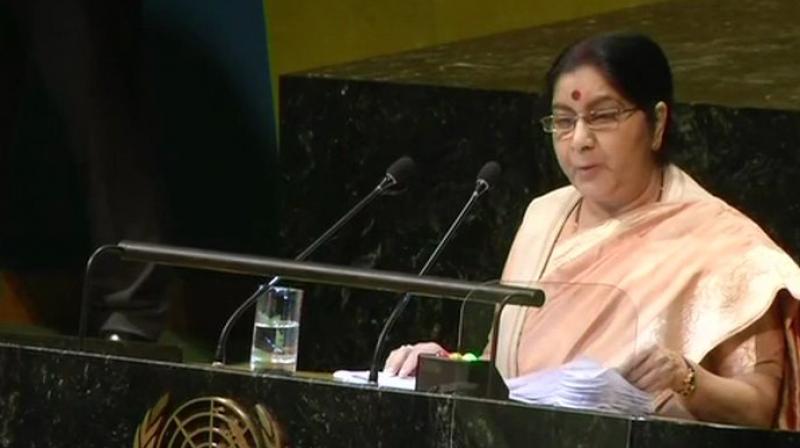 United Nations: In a strong attack against Pakistan, India told the UN General Assembly on Saturday that its neighbour's commitment to terrorism as an instrument of official policy has not abated one bit.

In her address to the General Debate of the 73rd session of the UN General Assembly here, External Affairs Minister Sushma Swaraj described terrorism as an "existential threat" to humanity.

Even as the perpetrators of the 9/11 terror attacks in New York met their fate, Swaraj said the mastermind of the 2008 Mumbai terror attack Hafiz Saeed still roams the streets of Pakistan with impunity.

"Pakistan's commitment to terrorism as an instrument of official policy has not abated one bit. Neither has its belief in hypocrisy," Swaraj said.

"The biggest challenge of our era comes from the existential threats of climate change and terrorism. We imagined that the arrival of the 21st Century would bring with it an age of common good, defined by cooperation in the quest for peace and prosperity. But here in New York, the horrific tragedy of 9/11, and in Mumbai, the catastrophe of 26/11 became the nightmares that shattered our dreams," Swaraj said.

She said the demon of terrorism now stalks the world, at a faster pace somewhere, a slower pace elsewhere, but life-threatening everywhere.

"In our case, terrorism is bred not in some faraway land, but across our border to the west. Our neighbour's expertise is not restricted to spawning grounds for terrorism; it is also an expert in trying to mask malevolence with verbal duplicity," Swaraj said.

The Indian leader told the world leaders at the General Assembly that the most startling evidence of Pakistan's duplicity was the fact that Osama Bin Laden, the architect and ideologue of 9/11 terror attack was given safe haven in the country.

Even after the world's most wanted terrorist was killed by American special forces, "Pakistan continued to behave as if nothing had happened," she said.

"America had declared Osama bin Laden it's most dangerous enemy and launched an exhaustive, worldwide search to bring him to justice. What America perhaps could not comprehend was that Osama would get sanctuary in a country that claimed to be America's friend and ally: Pakistan," she said.

Eventually, America's intelligence services discovered the truth of this hypocrisy, and its special forces delivered justice.

"What is heartening is that the world is no longer ready to believe Islamabad," she said citing that Financial Action Task Force (FATF) has put Pakistan on notice over terror funding.