Supreme Court allows entry of all women at Sabarimala temple

Sabarimala temple custom barring women of 10-50 age is not backed by the right to practise religion. 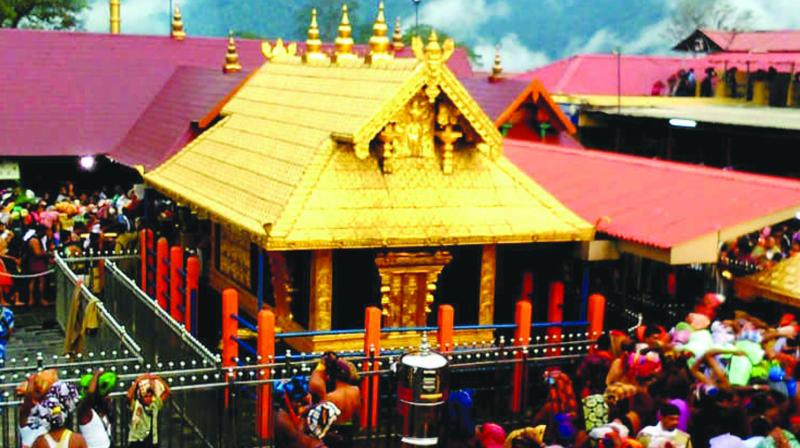 The Ayyappa temple at Sabarimala

New Delhi:The Supreme Court, in a historic verdict on Friday, allowed the entry of women of all ages into the Sabarimala Ayyappa temple in Kerala. Till now, women in the 10-50 age group were denied entry on the ground that they were of menstruating age. The court paved the way for their worship at par with men.

A Constitution Bench of Chief Justice Dipak Misra and Justices Rohinton Nariman, A.M. Kanwilkar, D.Y. Chandrachud and Indu Malhotra, by a majority of 4:1, held that denial of entry to women only on the ground that they were menstruating violated Article 14 of the Constitution — the right to equality. The rule brought by Kerala in 1965 denying entry of women in the 10-50 age group violated the right of women to worship, it said. Interestingly, the only woman in the bench, Justice Indu Malhotra, was the sole dissenter to the majority verdict. In his main verdict, the CJI said there couldn’t be any discrimination in approach to divinity and spirituality. “Man can’t dominate views of worship and biological factors can’t be a legitimate ground to deny women the right to worship,” the CJI said, adding that a patriarchal mindset had resulted in this prejudice against women.

He rejected the submission that devotees of Ayyappa constituted a separate section of Hindus. Custom and practice must allow everyone to offer worship without discrimination, he said, adding: “The courts must not grant legitimacy to religious practices which derogate women.”

Justice Misra said: “Women are in no way inferior to men. On one hand, women are worshipped as goddesses, but there are restrictions on the other hand. Relationship with God can’t be defined by biological or physiological factors. Banning entry of women to the shrine is gender discrimination. The practice of exclusion of women of the 10-50 age group cannot be regarded as an essential religious practice. Devotion cannot be subjected to discrimination. Patriarchal notions cannot be allowed to trump equality in devotion. Religion is a way of life — basically to link life with divinity. The Sabarimala temple’s practice violates the rights of Hindu women.”

The CJI held that rights guaranteed under Article 25(1) had nothing to do with gender or, for that matter, certain physiological factors specifically attributable to women and the denial of entry to the temple denudes them of their right to worship. He observed that there is nothing on record to show that the devotees of Lord Ayyappa have any common religious tenets peculiar to themselves, which they regard as conducive to their spiritual well-being, other than those, which are common to the Hindu religion.

The CJI also said that by allowing women to enter the Sabarimala temple to offer prayers, it couldn’t be imagined that the nature of the Hindu religion would be fundamentally altered or changed. The court also said the Devaswom Board had accepted before the high court that female worshippers of the 10-50 age group used to visit the temple and conducted pujas in every month for five days for the first rice-feeding ceremony of their children. It had also taken a stand that the restriction of entry for women was only during Mandalam, Makaravilakku and Vishu days.

The CJI observed: “Nobody can say that an essential part or practice of one’s religion has changed from a particular date or by an event. Such alterable parts of practices are definitely not the core of religion where the belief is based and religion is founded upon. It could only be treated as mere embellishments to the non-essential part of practices.

Justice Rohinton Nariman held that the customs and usage of the Sabarimala temple must yield to the fundamental right of women to worship in the temple. Although the rights claimed by Thantri and the believers in the temple’s customs have protection under Article 25(1), the right of a woman believer is also protected under Article 25(1), and her right should prevail over the right to maintain the exclusionary custom.

Referring to the submission that women of all ages are allowed in other Ayyappa temples, Justice Nariman said it was no answer to the denial of their fundamental right to practice religion as they see it, which includes their right to worship at any temple of their choice.

He said Section 3 of the Kerala Hindu Places of Public Worship (Authorisation of Entry) Act 1965 declared that every place of public worship of Hindus is open to all sections and classes of Hindus. The section had an overriding effect on contrary customs and usages. The rule violated the Constitution’s Articles 15(1) and 25(1).

Justice Nariman said the Sabarimala temple couldn’t claim the status of a religious denomination to claim rights under Article 26. Three things were stated as necessary in order to establish that a particular temple belongs to a religious denomination — the temple must consist of persons who have a common faith, a common organisation, and are designated by a distinct name. It was held that no answers could be found for the query whether Thanthris and worshippers alike are designated by a distinct name, he said.