For long, India has been calling for the reform of the UN Security Council along with Brazil, Germany and Japan. 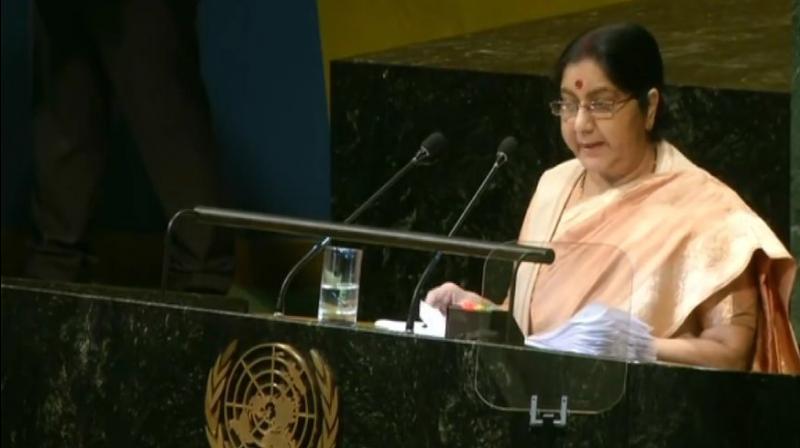 Swaraj warned against a delay in reforming the world body, saying reform must begin today as tomorrow could be too late. (Photo: ANI/Twitter)

United Nations: India on Saturday warned that the UN risks falling into irrelevance in the absence of fundamental reforms, saying multilateralism will collapse if the world body remains ineffective.

For long, India has been calling for the reform of the UN Security Council along with Brazil, Germany and Japan. The four countries support each others' bids for the permanent seats in the top UN body.

"I began by highlighting the unique and positive role of the UN, but I must add that step by slow step, the importance, influence, respect and value of this institution is beginning to ebb," External Affairs Minister Sushma Swaraj said in her address to the General Debate of the 73rd session of the UN General Assembly here.

Swaraj emphasised that the UN must accept it needs fundamental reform.

"Reform cannot be cosmetic. We need to change the institution's head and heart to make both compatible to the contemporary reality," she said.

Swaraj warned against a delay in reforming the world body, saying reform must begin today as tomorrow could be too late. "If the UN is ineffective, the whole concept of multilateralism will collapse," she said.

At a time when there is much debate about multilateralism, which as UN Secretary-General Antonio Guterres said is under fire precisely when it is needed the most, Swaraj said India will never weaken the multilateral mechanism.

"India believes that the world is a family, and the best means of resolution is shared discourse. A family is shaped by love and is not transactional; a family is nurtured by consideration not greed; a family believes in harmony not jealousy. Greed breeds conflict; consideration leads to resolution. That is why the United Nations must be based on the principles of the family. The UN cannot be run by the 'I', it only works by the 'We'," she said.

Drawing a parallel with the fate of the League of Nations, Swaraj said the League went into meltdown because it was unwilling to accept the need for a reform.

"We must not make that mistake. If 2030 is the agreed deadline for delivery on Sustainable Development Goals, then it also marks hundred years of the lapse of the League into irrelevance. Surely there is something to learn from this coincidence?" she said.

Swaraj stressed that India does not believe that the United Nations should become the instrument of a few at the cost of the many.

"India believes that we must move forward together or we sink into the swamp of stagnation," she said.

India has repeatedly reaffirmed the need for an early reform of the UN Security Council including the expansion of both permanent and non-permanent categories of membership to enhance its legitimacy, effectiveness and representativeness.

Along with the fellow nations in the G4 bloc, India has maintained that the current composition of the 15-nation Council does not reflect the changed global realities and stressed that UNSC reform is essential to address today's complex challenges.