The BJP is keen to wean away a part of the Samajwadi Party’s vote base and also make a dent in the BSP’s following by wooing most backward castes. 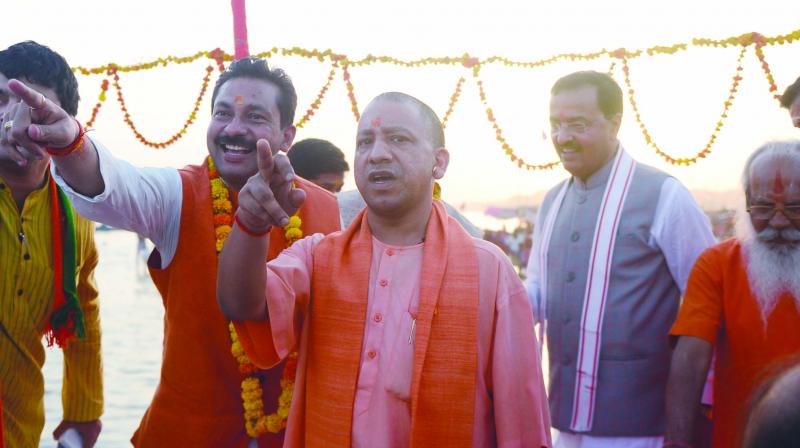 Lucknow: With the Lok Sabha elections approaching, the caste cauldron, as always,  is on the boil in Uttar Pradesh — the only difference being that from caste it has gone on to sub-castes.

Political parties in Uttar Pradesh are unabashedly organising sub-caste conferences, ignoring the 2017 Supreme Court order that said that “religion, race, caste, community or language would not be allowed to play any role in the electoral process” .The BJP that, till now, had put Hindutva on its priority list is now wooing sub-castes from the OBC category with a vengeance. The party apparently feels that addressing Hindus, in general, will not bring in adequate numbers in the elections.

Since the past one month, the BJP has been holding sub-caste conferences in Lucknow under the leadership of deputy chief minister Keshav Maurya — an OBC himself.

The BJP is keen to wean away a part of the Samajwadi Party’s vote base and also make a dent in the BSP’s following by wooing most backward castes.

There are over 200 sub- castes among the OBCs that constitute 40 per cent of the state’s population. The OBC population is dominated by Yadavs (15 per cent) and followed by Kurmis (9 per cent).

The remaining sub-castes constitute one to two per cent of the population.

The BJP, till now, has held conferences for sub-castes that include Nishad, Kashyap, Bind, Kurmi, Yadav, Chaurasia, Teli, Sahu, Nai, Vishwakarma, Baghel , Pal, Lodh, Jat, Giri, Goswami, Jaiswal , Kalvar, Saini, Mali, Gangwar and even Halwai that has a population of .02 per cent.

A number of these conferences have been addressed by chief minister Yogi Adityanath who has assured these sub-caste groups that the BJP would protect their interests. In the Jat Sammelan, the chief minister even agreed, in principle,  to their demand for reservation in government jobs and educational institutions.

A senior BJP functionary admitted that the party was keen to add to its present vote base since that would make up for any depletion due to the anti-incumbency factor.

“This is a conscious effort to bring marginalised sections of society into the party fold. What is wrong if we are trying to expand our vote base?” said a party leader.

Seeing the BJP making a concerted effort to woo the sub-caste groups, the Samajwadi Party that had so far remained content with its Yadav vote bank, has also announced that it will hold OBC Sammelan in every district from this week.

“We are not holding sub-caste Sammelan like the BJP and becoming blatantly casteist in approach. We are holding social justice programme for OBCs in general,” he said.

The Bahujan Samaj Party, on the other hand, is wooing various dalit sub- castes through its Bhaichara committees.

The Mayawati-led outfit realises the need to maintain its hold over the marginalised sections  - a key votebank of the party.

The Congress, so far, has avoided any such conferences.

Interestingly, none of the major political players in Uttar Pradesh have included Muslim OBCs and Muslim Dalits in their poll agenda.

Muslims are divided into 68 castes and sub-castes and  35 of them are OBCs.

Lautan Ram Nishad, secretary of the Rashtriya Nishad Sangh, on the other hand, accused the BJP of contempt of court.

“In 2013, on a petition filed by Motilal Yadav, the Allahabad high court had imposed a ban on caste conferences. Then in 2017, the Supreme Court passed a similar order on another petition. These caste conferences are, therefore, a clear violation of the court orders,” he said.

Out of the 80 Lok Sabha seats in Uttar Pradesh, 17 are reserved for candidates from the Scheduled Castes.