The state administration has been worried after rainwater entered government offices and streets, bringing life to a complete halt in Patna. 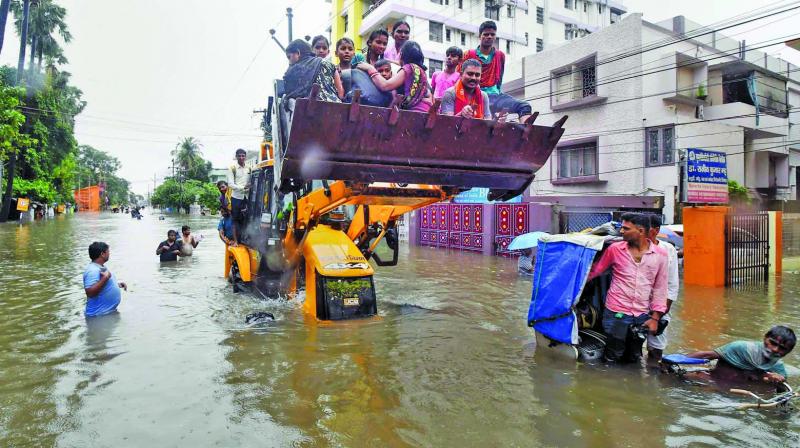 Patna Muncipal Corporation officials in a JCB rescue to people from a water logged area after heavy rainfall on Saturday. (Photo: PTI)

Patna: Heavy rains in the last 24 hours and waterlogging in streets, hospitals, and educational institutions have exposed the failures of the state government.

Questions are also being raised on the claims of the state government to include Patna and other cities of Bihar into the list of “smart city” in the next few years.

The state administration has been worried after rainwater entered government offices and streets, bringing life to a complete halt in Patna.  Several hours of rains also caused trouble to patients who had been admitted to a premiere medical institution Nalanda Medical College Hospital (NMCH).

Sources told this newspaper that hospital staff faced difficulty in providing medical support to patients and several machines were also shut down due to waterlogging.

It has been raining continuously in Patna and other districts of Bihar for the last two days and according to sources here the situation occurred be-cause the hospital is located at a low-lying area.

Meanwhile, Bihar chief minister Nitish Kumar expressed concern about the continuous rains and the rising water level in most major rivers, including Ganga and Burhi Gandak, and asked district magistrates to identify safer zones and prepare to evacuate people if the condition deteriorates in rural areas.

Based on the meteor-ological department reports, the chief minister’s office also released a statement claiming that over 52 millimetres of rainfall had been recorded in the  past 24 hours and the situation was likely to continue for at least another 48 hours.

In Patna and other cities, the municipal corporation has been directed to remain on high alert and evacuate people who have been stranded due to heavy rains.

According to the disaster management department bulletin, as many as 23 districts are already affected by floods as water in major rivers are flowing above the danger level at many places. According to officials, “Schools in have been closed as a precautionary measure”.