To evacuate people, 32 boats have been pressed into service in flooded parts of the city. 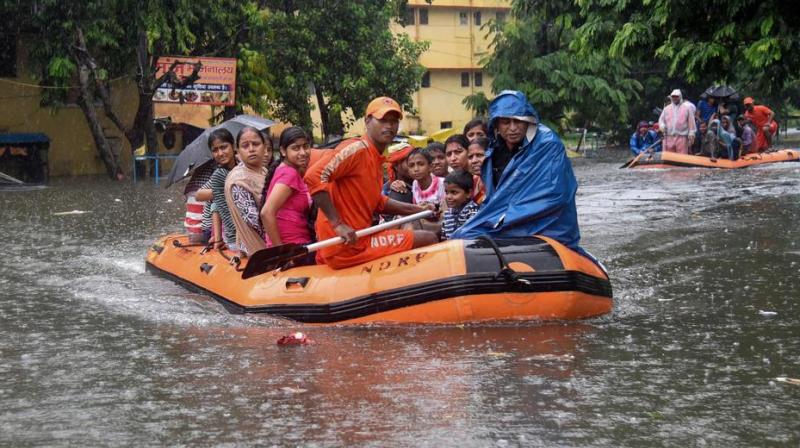 Several state-run hospitals including the Nalanda Medical College and Hospital, which is one of the largest in Patna, are flooded. (Photo: PTI)

Three teams of the National Disaster Response Force have been deployed in the city of Patna and more rescue teams are expected to reach later in the day. Boats are out on roads for rescue operations, NDTV reported.

Twenty-five people have died in Bihar, including four in Patna, as heavy rain caused flooding in several districts in the last three days.

Several state-run hospitals including the Nalanda Medical College and Hospital, which is one of the largest in Patna, are flooded.

Videos shared on social media showed patients sitting on beds in flooded hospital rooms. Thirty-two boats have been pressed into service in flooded parts of the city.

Flooding on roads led to huge traffic jams while heavy rain also disrupted rail traffic, leading to train cancellations and delays in the last three days. In several parts of the city, residents have complained that there's no power supply for the last two days.

In another video shared on social media, a rickshaw puller is seen stranded in floodwater, crying as he tries to pull the rickshaw, feeling helpless. Some residents, who are apparently recording the video, can be heard giving him directions.

The flood situation in the capital city of Bihar is exceptional, NDTV reported. People have not been able to buy essential commodities as shops are shut.

On Saturday, Chief Minister Nitish Kumar held a review meet, via video conferencing, with officials concerned and directed immediate relief efforts. Schools are shut in the city till Tuesday.