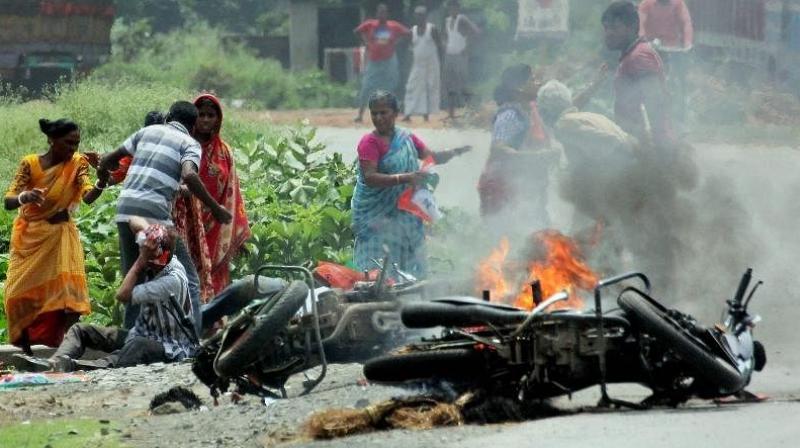 People injured in poll violence sit by the side of a road as a vehicle is set on fire by locals during Panchayat polls in Nadia district of West Bengal. (Photo: PTI)

New Delhi: The Supreme Court on Tuesday sought the Centre’s response on a plea by the West Bengal government challenging the Calcutta high court ordering a CBI probe into the cases of murder and crime against women that allegedly took place soon after elections to the state Assembly early this year.

Seeking the Centre’s reply, and from other respondents, Justice Vineet Saran heading a bench also comprising Justice Aniruddha Bose, told senior lawyer Kapil Sibal that on the face of it, “You have made a case for issuance of notice. Let us see. We will give a short time for respondents to file counter and will hear the matter for further hearing on October 7.”

Mr Sibal, appearing for the West Bengal government, told the court that if the chief minister took oath on May 5 and if something happens in June, can it be called post-poll violence?

Mr Sibal said that the case was taken up by a five-judge bench and the first interim order was passed on June 18 in terms of which the Calcutta high court had said that they have requested the National Human Rights Commission (NHRC) chairman to constitute a committee to look into these cases.

Questioning the impartiality of some members of the committee, Mr Sibal told the court ,“According to us, the committee had members who are openly affiliated to the Centre or ruling party (BJP). The committee consists of seven members. They are -- Rajiv Jain, A Rasheed, Raju Ben Desai, Santosh Mehra, K. Kumar Panja, Raju Mukherjee and M Saini.”

He objected to the first three members. Alleging bias, Mr Sibal, to buttress his point, referred to an earlier judgment of the court which had said that a probe committee falls even if one person is biased.

Mr Sibal said that in a federal structure when there are two ideologically opposed parties ruling at the Centre and in a state, what is the duty of the court.

"In a federal structure, the state government cannot be castigated without giving it adequate opportunity. The high court passed the order without without furnishing the copy of the interim report of the NHRC committee to the state. The high court refused to share with the state the annexures of of rape complaints, saying that the victims' anonymity needs protection... The high court order is contrary to the principles of natural justice, as the state was not given adequate opportunity to respond. State was asked to respond to thousands of complaints within seven days. No investigation can be completed within seven days. The high court also did not consider the materials on record placed by the state," he said.

Mr Sibal told the court that the high court questioned as if every police officer could not be trusted, every police officer was influenced by the state government. So, en masse transfer of cases. But the same questions were not asked of Central agencies. The party in power in Centre is the same who filed complaints.

Mr Sibal argued that a “fair probe” into the post-poll violence cases is unlikely since the CBI is allegedly acting at the behest of the Bharatiya Janata Party (BJP)-led Central government.

The Mamata Banerjee government has challenged Calcutta high court’s August 19 direction asking the CBI to investigate the cases of murder and violence against women that took place during post-poll violence in West Bengal. The high court had said that other post-poll violence cases will be investigated by a Special Investigation Team (SIT).

The high court had also said that both the investigations by CBI and the SIT will be monitored by it.

The high court order was based on the report of the seven-member committee that was constituted by the National Human Rights Commission to inquire into the post-poll violence.

The high court in its order had said, “All cases as per report of NHRC committee where allegations are about murder of person or crime against women regarding rape or attempt to rape shall be referred to CBI for investigation."