We demand 'janeudhari' Rahul Gandhi clarify to which 'gotra' does he belong to, BJP spokesperosn Sambit Patra said. 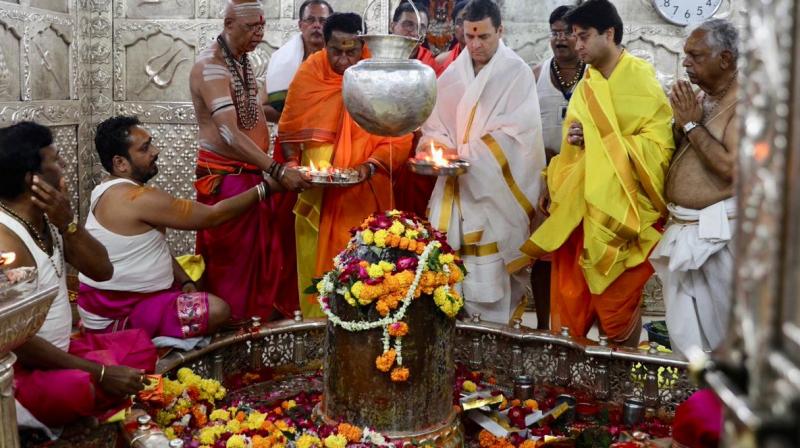 The saffron party's attack on Gandhi came in the backdrop of his frequent visits to temples -- the latest being a trip to Ujjain's Mahakaleshwar temple on Monday, ahead of his tour of the politically significant Malwa-Nimar region in poll-bound Madhya Pradesh.

The ruling party also asked Gandhi to expel Tharoor from the Congress for his controversial remarks against PM Modi.

The Congress MP from Kerala stoked a fresh controversy on Sunday, claiming that an unnamed Rashtriya Swayamsevak Sangh (RSS) leader had compared the Prime Minister to "a scorpion sitting on a Shivling" and termed it as an extraordinarily striking metaphor.

"The objectionable statement of Tharoor, who is very close to Rahul Gandhi, has disrespected not only the holy deity of Lord Mahadev, worshipped by crores of Hindus, but also Prime Minister Narendra Modi. In such a situation, how will he (Gandhi) offer prayers at the Mahakal temple," BJP national spokesperson Sambit Patra told reporters in Indore.

Alleging that Congress leaders were continuously disrespecting the Hindus by making objectionable statements, Patra demanded that Gandhi apologise for Tharoor's remarks and expel the 62-year-old UN diplomat-turned-politician from the party.

He claimed that after the humiliating defeat in the 2014 Lok Sabha polls, a committee headed by former Union minister A K Antony had said the Congress should take care of the Hindus for its political revival as it was losing ground because of its projected image of a "party of Muslims".

"After the Antony committee's report, Rahul Gandhi is exhibiting fancy dress Hinduism continuously. To mislead the Hindus, he is sporting a "janeu" (scared thread) over the shirt. We demand that 'janeudhari' Rahul Gandhi clarify to which 'gotra' (clan) does he belong to," Patra said.

He also said since Gandhi had not given any answer to this question, people were calling him a "Vatican gotra ka Brahmin".