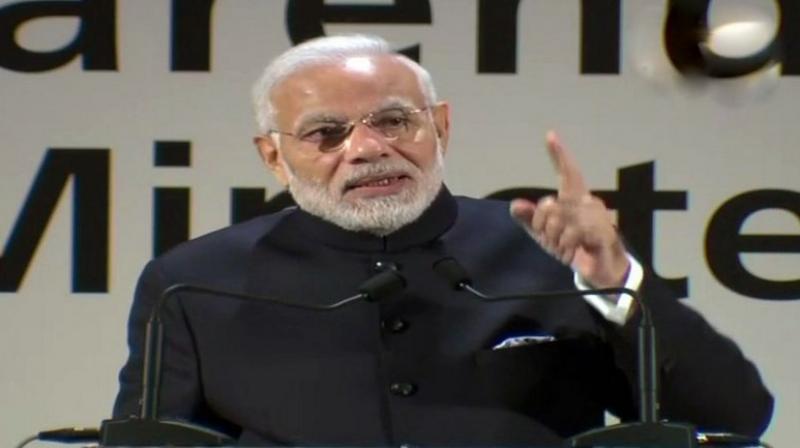 Prime Minister Narendra Modi spoke about the 'Make in India' campaign which has been initiated to boost manufacturing in India. (Photo: Twitter | ANI)

New Delhi/Tokyo: Prime Minister Narendra Modi on Monday congratulated the Indian diaspora in Tokyo for taking 'brand India' to new heights by introducing cricket, Indian food and culture to the island nation, which has long worked with India in several sectors such as infrastructure, auto and technology.

"Just as how lamps light up the dark during Diwali wherever you are, you are spreading the light of India to every corner of the world and Japan and making the country proud. My best wishes are with you," PM Modi said after he was greeted by a group of Indians in Tokyo on the last day of his two-day Japan visit.

PM Modi stressed on the massive “transformative” phase in India and said, “The world is appreciating India for its efforts towards services towards humanity. The policies being made in India, the work being done towards public welfare, for these the nation is being felicitated today.”

While delivering his speech in Japan, a country known for its high-technology products, Prime Minister Narendra Modi spoke about the “Make in India” campaign which has been initiated to boost manufacturing in India.

“Today India is making tremendous progress in field of digital infrastructure. Broadband connectivity is reaching villages, over 100 crore mobile phones are active in India. One GB (gigabyte) is cheaper than a small bottle of cold drink. Data is becoming a tool for service-delivery,” the Prime Minister said.

He also said that India will “grab world’s attention” on Sardar Patel’s birth anniversary celebration scheduled to be held on October 31. “Sardar sahab ki pratibha jitni oonchi thi, pratima bhi utni hi oonchi banegi (The statue of Sardar Patel will be as big as his abilities),” he said.

PM Modi and his Japanese counterpart Shinzo Abe came to Tokyo in a train on Sunday after spending eight hours together in the picturesque Yamanashi prefecture, where they held informal talks and visited a factory.

PM Modi, who is in Japan for the 13th India-Japan annual summit, met his counterpart Shinzo Abe and held informal talks with him.

Abe who called PM Modi one of his “most dependable friends,” hosted him at a personal villa near Lake Kawaguchi in Yamanashi for a private dinner.

PM Modi is the only foreign political leader to have received the invitation. The duo also visited a factory, took a train ride together. The two prime ministers spent about eight hours together, MEA officials said.

Japan is lending Rs 88,000 crore to India for the Ahmedabad-Mumbai bullet train that will run 508 km, out of which 21 km in an undersea tunnel. The loan carries interest rate of 0.1 per cent, to be repaid over half a century.