Amit Shah's physique, which is made up of only water, doesn't have much strength to pull down Kerala govt, Vijayan said. 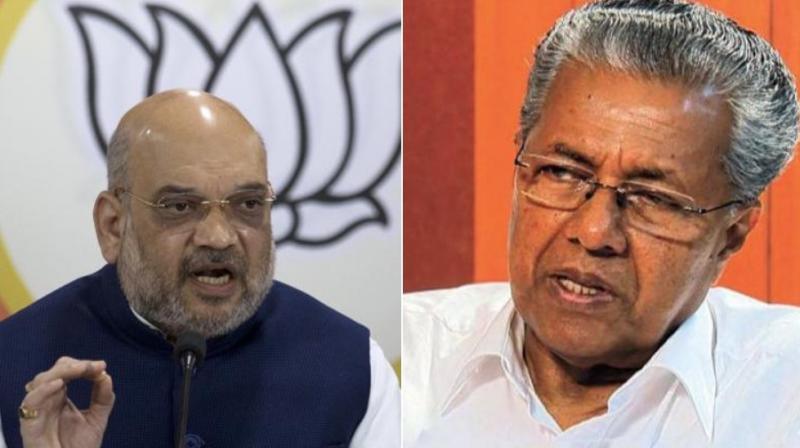 Kochi: A day after BJP President Amit Shah reacted to Supreme Court September 28 Sabarimala verdict saying that courts should not pronounce verdicts that cannot be implemented, Kerala Chief Minister Pinarayi Vijayan on Sunday hit back, saying the BJP chief’s remarks come against the backdrop of Babri Masjid case, which is likely to come up in the Supreme Court on Monday.

“Are these the words that should come from the chief of the country’s ruling party? Can a leader of the ruling party adopt such an undemocratic stand,” Vijayan added.

The Kerala Chief Minister also mocked at Amit Shah, saying his "strength" won’t be enough to pull down the Kerala government led by the CPI-M.

“BJP workers’ godfather Amit Shah made a declaration in Kerala that the state government would be pulled down. His (Shah’s) physique, which is made up of only water, does not seem to have that much strength to pull down the government. That body is not enough (to unseat the government)… Amit Shah, such things you can practice in Gujarat,” Vijayan said.

On Saturday, the BJP President warned Vijayan not to play with the Sabarimala issue and warned that his party would not mind throwing out the Kerala government if it tried to tinker with issues of faith.

Shah also criticised police action against those who protested against implementing the Supreme Court verdict allowing entry of women of menstruating age (between 10 to 50 years) to the Lord Ayyappa shrine in Sabarimala.

Vijayan added that despite trying all the tricks, Amit Shah had not been able to get a foothold in Kerala.

“How long have you been targeting Kerala. At one point in time, you took out a jatha (journey) claiming to win over Kerala. Why were you forced to go back a day after launching that journey. Did anyone of us protest against that (journey). But, people did not mind, that was the result,” he said.

Earlier, Kerala BJP President PS Sreedharan Pillai had clarified that Shah had never said the Centre would pull down the state government and that he said people would revolt against the Left. "That was what our president said but the media has twisted his statements," Pillai said.

The Left says that Amit Shah’s comments on Saturday that, "We (BJP) stand like a rock with the devotees," is a court violation.