Lal Bahadur Shastri: In a time of war, the man of peace

Born into a poor family in 1904, Shastri spent the formative years of his life in Ramnagar, near Varanasi. 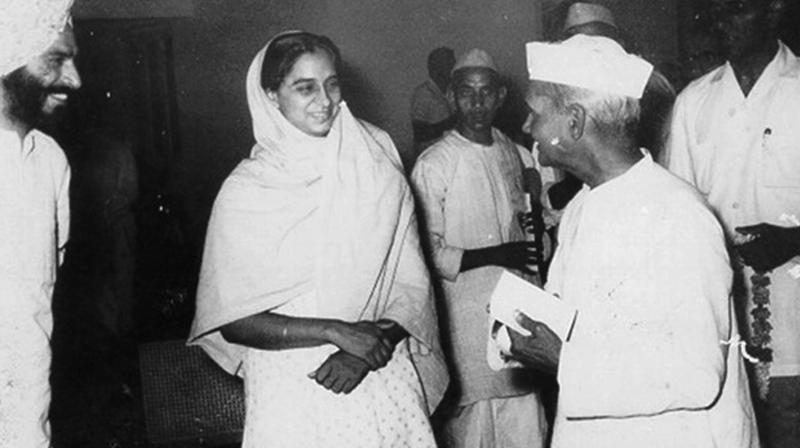 The huge void created after Nehru’s death was filled when Lal Bahadur Shastri, a politician from Uttar Pradesh who held home and railway portfolios in Nehru’s Cabinet, took over as India’s second Prime Minister on June 9, 1964.

Bengaluru: Lal Bahadur Shastri served as the Prime Minister during one of the most turbulent periods of India after independence. The man who would rise to lead the nation was born into extremely difficult circumstances, to a poor Hindu family. His family had been traditionally employed as administrators and civil servants. He lost his father before he turned two, during an onset of Bubonic Plague in 1906.

Lal Bahadur Shastri: Politics and Beyond', by Sandeep Shastri, political expert and pro Vice Chancellor, Jain University, was released by former ISRO chief, Dr K. Kasturirangan in Bengaluru on Friday. The event was presided over by Dr Chenraj Roychand, president, Jain Trust and was followed by a panel discussion with Sudhir Krishnaswamy, Vice Chancellor, NLSIU and Dr MK Sridhar, member of the Advisory Board on Education, MHRD.

Born into a poor family in 1904, Shastri spent the formative years of his life in Ramnagar, near Varanasi. Perhaps these hardships shaped the sterling qualities that guided him through his later life, which saw him rise to the helm of the country's politics.

As a student in Harish Chandra School, Varanasi, Shastri was unable even to afford an English textbook. Still, he made no excuses, borrowing books from his peers, making notes and returning them, all to complete the task that had been given to him. His principle, even at that age, was to 'make the extra effort to complete the task and not make deprivation an excuse'. He was greatly inspired by the freedom movement, the non-cooperation movement in particular, having heard Mahatma Gandhi's rousing speech on it at a public event, when he was a teenager. He quit school the next day and joined the local chapter of the Congress party. He was jailed several times during the freedom struggle.

During one of these jail terms, his daughter fell seriously ill. He was granted parole for two weeks. Tragically for him, his daughter didn't survive the fortnight, so he returned, dejected, before the end of his parole. Other inmates asked, in amazement, "why did you come back early?" Shastri simply responded, "Parole was given to me to look after my daughter, who is no more, so it is my duty to return to jail." This shows the respect and attitude he maintained for legality, procedures and the strict code of discipline he enforced on himself. Dr Sandeep Shastri's book is a crucial narration of Shastri's roles and responsibilities during a critical 13-year period, between 1951 and 1964.

This period commenced with the preparations for the first general election and ends with the death of Pandit Jawaharlal Nehru. It was during this time that Lal Bahadur, who had been assigned the moniker 'Shastri' or 'scholar', carved himself a unique niche in national politics.

As Home Minister, he was assigned several troubleshooting missions, including the controversy simmering in Assam, the crisis in Punjab, dealing with increasing language hostilities in the then Madras state and of course, 'managing the implementation of the Emergency in the period of Chiense aggression in 1962'.

One of his most important contributions as Home Minister, however, was revamping the administration and bringing in sweeping reforms. His navigation and strategies in the Kamaraj Plan are also an important part o the book.

After this, came the process that led to Shastri ji's entry to the Prime Minister's office, for which he was backed by some senior leaders, including Kamaraj. Shastri went on to spearhead the iconic 'Shastri vrat', in response to the food crisis in India. The country was reeling under a food shortage and Shastri urged people to voluntarily give up one meal, so there would be more to distribute to affected areas. However, he first implemented the system within his own family. The response was overwhelming. Even restaurants and eateries downed shutters on Monday evenings. He motivated the country to maximise the cultivation of food grain and ploughed the lawn at his official residence in New Delhi.

He also focussed his attentions on strengthening research in agriculture, setting up the Indian Council of Agriculture and laying the foundations for the Green Revolution. He also promoted the White Revolution, lent support to the Gujarat milk-cooperative, Amul and appointed Dr Verghese Kurian as Chairman of the National Dairy Development Board.

Dr Sandeep Shastri's book is a highly readable account of a leader whose legacy was crucial but overshadowed by the that of the Nehru-Gandhi family. Here, Lal Bahadur Shastri emerges as an undoubtedly towering figure in India's history.

Lal Bahadur Shastri remained, to the end, a staunch Gandhian. A man of great tact and honesty, he made very few enemies, even at the height of the Indo-Pakistan war. He thought differently from the leaders who preceded him and his heart remained always with the people of the soil. Down-to-earth, empathetic and with a unique approach to enthusing the electorate, his policies live on today, markedly different from any other leader of post-Independence India.