China accused US of ‘violating the norms of international relations, and instigating’ other countries in the region against it 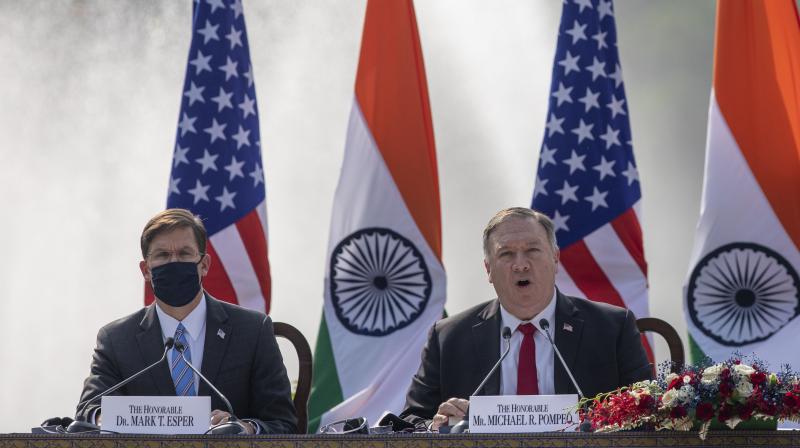 U.S. Secretary of State Mike Pompeo, right, speaks with Secretary of Defence Mark Esper seated beside him during a joint press conference with their Indian counterparts at Hyderabad House in New Delhi, India, Tuesday, Oct. 27, 2020. In talks on Tuesday with their Indian counterparts, Pompeo and Esper are to sign an agreement expanding military satellite information sharing and highlight strategic cooperation between Washington and New Delhi with an eye toward countering China. (AP)

New Delhi: Furious over criticism directed at it by Secretary of State Michael R. Pompeo and Secretary of Defense Mark T. Esper in New Delhi on Tuesday, China on Wednesday blasted the United States and accused it of “repeating old lies, violating the norms of international relations and basic principles of diplomacy, and instigating” other countries in the region against Beijing. China accused the US of doing this as a ploy to “maintain its global hegemony”, and asked it to “abandon the Cold War and the zero-sum mentality, stop hyping up the so-called ‘China threat’, and stop the wrong actions that undermine regional peace and stability”.

In a statement released in the wee hours of Wednesday, the Chinese Embassy in New Delhi said the Sino-Indian boundary issue is a “bilateral matter between China and India” and that “China and India have the wisdom and ability to handle their differences properly”, adding that “there's no space for a third party to intervene”. The statement virtually served as a warning to the US not to interfere or intervene in the Sino-Indian border dispute.

Beijing also said the “Indo-Pacific strategy proposed by the US is to stir up confrontation among different groups and blocs and to stoke geopolitical competition, in a bid to maintain the dominance of the US, (and) organise closed and exclusive ideological cliques”, in what is being seen by observers as a veiled reference to the four-nation Quad comprising the US, India, Australia and Japan. But interestingly, there was no criticism of India in the statement.

It added, “Anyone who turns a blind eye to the fact that the (Communist Party of China) CPC is endorsed and supported by the Chinese people or wantonly slanders the CPC is openly standing on the opposite side of the Chinese people.”

In a strong message to Beijing at the conclusion of the third edition of the 2+2 Dialogue between both countries at the Foreign and Defence Ministerial level in New Delhi on Tuesday, United States Secretary of State Michael R. Pompeo had said his country and India are together taking steps to address all manner of security threats including those posed by China, and that the US “would stand with India”, adding that the ruling Chinese Communist Party in China is “no friend to democracy and the rule of law”. US Secretary of Defense Mark T. Esper had also pointed to the “aggression and destabilising activities by China” in Asia and the Indo-Pacific region.

On Friday, the Chinese Embassy said, “The US Secretary of State Michael Pompeo and other senior official repeated old lies, attacked and made allegations against China, violated the norms of international relations and basic principles of diplomacy, instigated China's relations with other countries in the region, which once again exposed their Cold War mentality and ideological bias. The Chinese side expresses its firm opposition to it.”

It added, “It is known to all that China has been unswervingly committed to peaceful development and developed friendly cooperation with our neighbors based on mutual respect. China has always upheld multilateralism and remained committed to maintaining an international system with the United Nations at its core and an international order based on international law. China resolutely opposes behaviour of engaging in unilateralism and bullying. By hyping up the so-called "China threat", the US is in fact making pretexts for maintaining its global hegemony and containing China's development.”

The Chinese Embassy further said, “The ‘Indo-Pacific strategy’ proposed by the US is to stir up confrontation among different groups and blocs and to stoke geopolitical competition, in a bid to maintain the dominance of the US, organise closed and exclusive ideological cliques.  ... Peaceful development and win-win cooperation are the only right path forward.”

Beijing added, “The boundary question is a bilateral matter between China and India. The two sides have been discussing disengagement and de-escalation in the border areas through diplomatic and military channels. China and India have the wisdom and ability to handle their differences properly. There's no space for a third party to intervene.”