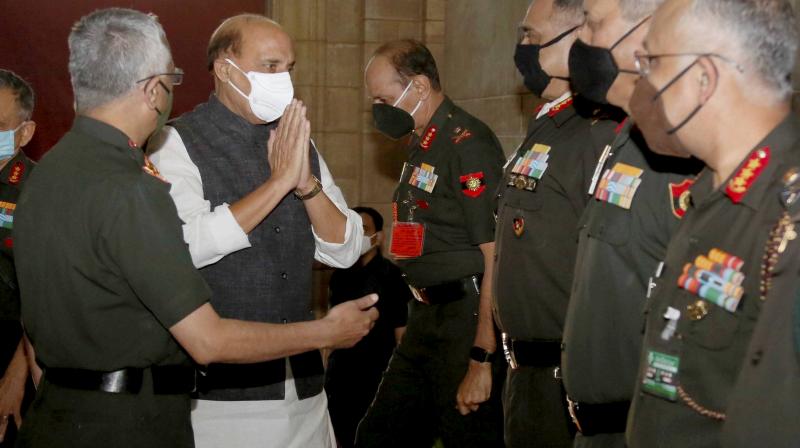 New Delhi: Defence minister Rajnath Singh said Wednesday that while Army troops were standing firm at the northern border with China, the ongoing talks for a peaceful resolution of the standoff will continue.

Addressing the ongoing Army commanders’ conference in New Delhi, held from October 26 to 29, Mr Singh said that there were no budgetary constraints for capability development and meeting other requirements of the Army.

The eight round of the corps commanders’ level talks between India and China to resolve the six-month military standoff in eastern Ladakh is likely to be held soon.

With initial snowfall reported in Ladakh, he said the best weapons and winter clothing will be provided to the troops. “It is our national responsibility to ensure availability of the best weapons, equipment and clothing to our troops braving extreme weather and hostile forces to defend our territorial integrity,” said Mr Singh.

The commanders are deliberating on all aspects of the existing security scenarios, the situation in the hinterland and challenges for the security apparatus.

Referring to the situation along the western border, he complimented the Indian Army’s response to cross-border terrorism and ceasefire violations. “I compliment the excellent synergy between the Central armed police forces, the police and Army in tackling the menace of terrorism in Jammu and Kashmir. It is due to the synergised operations in the Valley that the Union territory of Jammu and Kashmir is moving to a stable and peaceful environment conducive for overall growth and development,” said Singh.