A Joint Statement on cooperation for peace, stability and prosperity in the region was also adopted at the Summit 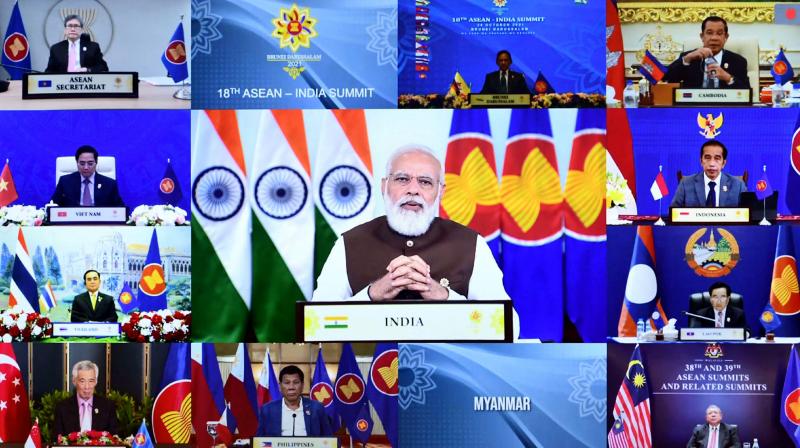 New Delhi: In what is being seen as a clear message to Beijing, Prime Minister Narendra Modi on Thursday  co-chaired the 18th India-Asean Summit with leaders of nine of the 10 Asean nations, with the leaders “affirming the importance of maintaining and promoting peace, stability, safety and security in the South China Sea, and ensuring freedom of navigation and overflight”.

A Joint Statement on cooperation for peace, stability and prosperity in the region was also adopted at the Summit, with New Delhi reiterating its support for Asean centrality in the Indo-Pacific region and also the freedom of navigation. Maritime cooperation will also be strengthened.

In its Statement, the MEA said, “PM Narendra Modi today participated in the 18th India-Asean Summit at the invitation of His Majesty Sultan Haji Hassanal Bolkiah of Brunei, the current Chair of Asean. The Summit was held virtually and saw participation from the Leaders of Asean Member States.”

The MEA further said, “Highlighting the milestone of 30th anniversary of India-Asean  Partnership, the leaders announced the Year 2022 as India-Asean Friendship Year. Prime Minister underlined the centrality of Asean in India’s Act East Policy and in India’s Vision for the wider Indo-Pacific Vision.”

New Delhi added, “On COVID-19, the Prime Minister highlighted India’s efforts in the fight against the pandemic in the region and also reiterated support for ASEAN’s initiatives in this regard. India has contributed medical supplies worth USD 200,000 to ASEAN’s humanitarian initiative for Myanmar and USD 1 million for ASEAN’s Covid-19 Response Fund.”

“On trade and investment, he underlined the importance of diversification and resilience of supply chains for post-COVID economic recovery and in this regard, the need to revamp the India-ASEAN FTA,” New Delhi said.

The MEA added, “The discussions also covered regional and international issues of common interest and concern, including South China Sea and terrorism. Both sides noted the importance of promoting a rules-based order in the region including through upholding adherence to international law, especially the UNCLOS. The leaders affirmed the importance of maintaining and promoting peace, stability, safety and security in the South China Sea, and ensuring freedom of navigation and overflight.”