PM Modi to call on Pope Francis for first time 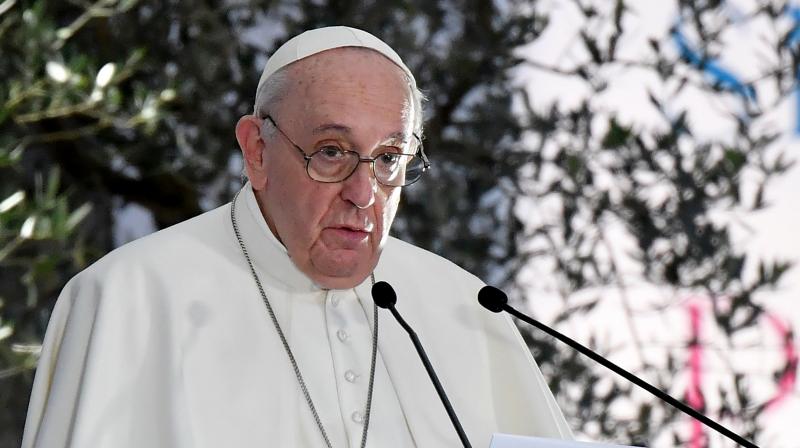 The sources also indicated that the PM’s meeting with the Pope, that is expected at the Vatican on Saturday morning, could pave the way for a papal visit to India. (AFP)

New Delhi: Prime Minister Narendra Modi will call on Pope Francis at Vatican City during his visit to Italy to attend the 16th G-20 summit in Rome starting Friday, in what foreign secretary Harsh Vardhan Shringla said would be an “important” meeting. Sources noted that this would be the first-ever meeting with Pope Francis for Mr Modi since he became Prime Minister in 2014.

The sources also indicated that the PM’s meeting with the Pope, that is expected at the Vatican on Saturday morning, could pave the way for a papal visit to India. Pope Francis has been head of the Roman Catholic Church since 2013. The last papal visit to India was in the 1990s during the papacy of Pope John Paul II. Some political sources hinted that the move might be part of the BJP government’s attempt to reach out to the Christian community ahead of the Goa Assembly elections early next year.

Mr Shringla, briefing reporters here Thursday, said the PM would leave New Delhi late Thursday night and will be in Italy from October 29 to 31 before heading to Glasgow, Scotland, for the COP-26 World Leaders’ Summit, pertaining to clean energy and combating climate change on November 1.

The G-20 comprises 20 of the world’s largest economies including India. The G-20 summit will focus on economic and health recovery amid the Covid-19 pandemic as well as job creation and skill development, the foreign secretary said at a special briefing.

Asked about World Health Organisation (WHO) recognition for India’s indigenously developed Covid vaccine Covaxin, Mr Shringla said that the WHO’s Technical Action Group had made certain queries to Covaxin’s manufacturer Bharat Biotech, for which the answers were supposed to be given soon. He hoped that WHO’s recognition for Covaxin would come through soon after that.

Prime Minister Modi is scheduled to hold several bilateral meetings with world leaders on the sidelines of the two summits in Rome and Glasgow. He is due to hold meetings with Italian PM Mario Draghi in Rome as well as with the Saudi Crown Prince there.

The MEA had earlier said: “This will be the 8th G-20 summit that the Prime Minister will be attending. The G-20 has emerged as the premier global forum for international economic cooperation. India is scheduled to host the G-20 summit in 2023 for the first time. The forthcoming summit under the Italian presidency is centred around the theme ‘People, Planet, Prosperity’, focussing on the areas of (i) Recovery from the Pandemic and Strengthening of Global Health Governance, (ii) Economic Recovery and Resilience, (iii) Climate Change and Energy Transition, and (iv) Sustainable Development and Food Security."

The MEA had added: “The Prime Minister will thereafter travel to Glasgow to attend the World Leaders’ Summit of the 26th Conference of the Parties (COP26) to the United Nations Framework Convention on Climate Change (UNFCCC), at the invitation of British Prime Minister Boris Johnson. COP26 is being held from 31 October to 12 November under the presidency of the UK partnering with Italy. The high-level segment of COP26, titled the World Leaders’ Summit (WLS), will be held on 1-2 November 2021. The summit will be attended by the heads of state/government of more than 120 countries.”

The MEA had further said: “The UNFCCC embodies the global will and vision to combat climate change. The periodic Conference of Parties to this Convention have emerged as global climate summits, providing an opportunity for stocktaking and for charting the way forward. Prime Minister last attended the COP21 in Paris in 2015, when the Paris Agreement was concluded, and whose implementation commences this year. At COP26, the Parties will work to achieve the completion of Paris Agreement implementation guidelines; the mobilization of climate finance; actions to strengthen climate adaptation, technology development and transfer; and keeping in reach the Paris Agreement goals of limiting the rise in global temperatures.”