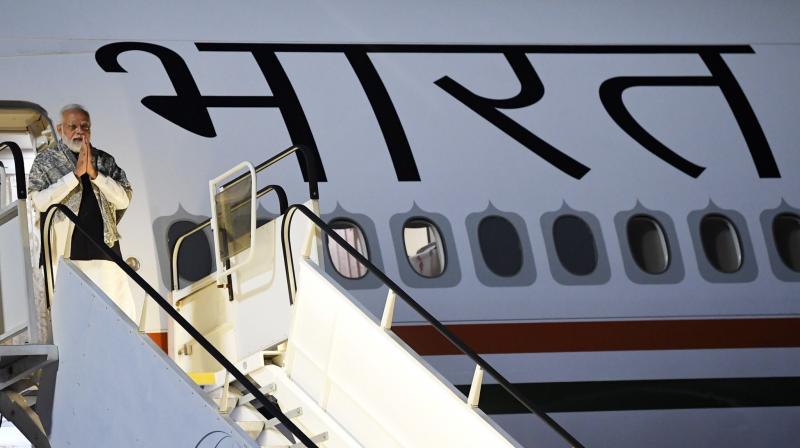 Rome: Prime Minister Narendra Modi arrived in Italy on Friday to participate in the two-day G20 Summit, the global forum for international cooperation.

PM Modi is likely to hold several bilateral meetings on the sidelines of the G20 Summit including one with Italian PM Mario Draghi.

Sources stated that ahead of the summit, PM Modi is scheduled to have a brief meeting with European Union President Ursula Von Der Leyen and President of European Council Charles Michel on Friday.

Apart from attending the summit, which has its focus on the global economy, health, sustainable development, environment and climate change, there are likely to be meeting with heads of several states.

Sources claimed that there are at least three such meets lined up on the sidelines on the first day of the Summit. PM Modi will use this opportunity to ensure greater cooperation from the nation's participating in the G20 summit.

PM Modi is expected to be hosted at the residence of the Italian PM in the evening. On October 30, the Prime Minister is scheduled to meet Pope Francis at the Vatican early morning and will attend the G20 summit that has "Global Economy and Global Health" as the first session.

The next day, the Prime Minister is expected to have a meeting with Prime Minister of Spain Pedro Sanchez and German Chancellor Angela Merkel on the sidelines of the G20 summit besides participating in discussions on "Climate Change and Environment and Sustainable Development". There will be a global summit on supply chain resilience, sources said.

Later today, PM Modi will pay floral tribute to Mahatma Gandhi at Piazza Gandhi. Sources stated that there is a cultural event that PM Modi can attend and is likely to visit some historical sites as well.

The Summit is being attended by heads of state, governments of G20 member countries, the European Union and other invited countries and international organisations.