Rahul Gandhi is also in Gujarat on Wednesday and Thursday and is expected to address multiple rallies. 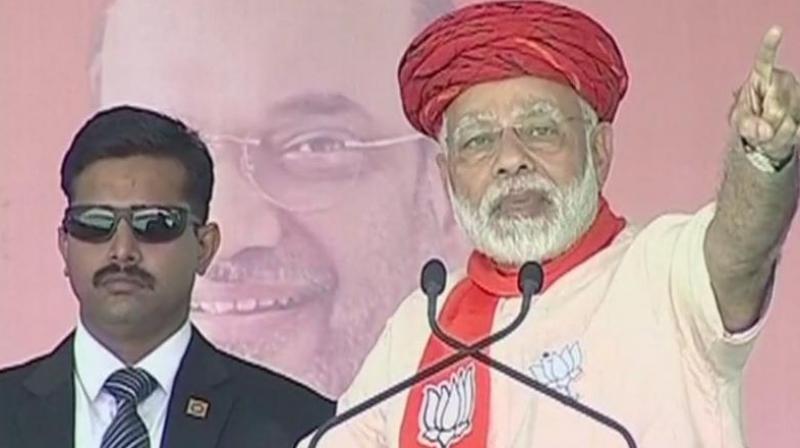 Addressing a huge rally in Morbi town in the region, which goes to polls in the first phase on December 9, he accused the Congress of taking credit for minor schemes, like providing hand-pumps, while saying that the BJP rule brought in major works like the Narmada project. (Photo: ANI/Twitter)

In a stinging rebuttal to Gandhi's repeated criticism of the Goods and Services Tax, a key economic reform of the NDA government, Modi said a recently emerged "economist" was propagating a "grand stupid thought" by suggesting that GST rate be capped at 18 per cent.

Making a fresh bid for power in his home state, where the BJP has ruled for over two decades, Modi also listed various development works by the government on water conservation, agriculture and development of the Saurashtra region.

Addressing a huge rally in Morbi town in the region, which goes to polls in the first phase on December 9, he accused the Congress of taking credit for minor schemes, like providing hand-pumps, while saying that the BJP rule brought in major works like the Narmada project.

Making a strong appeal to the people to vote for the BJP in this Patidar community stronghold, Modi said his party should not be voted out for 100 years.

"Today, some so called smart people, some new economists have emerged who are misleading people," he declared in his speech in Gujarati.

"Those who have looted people throughout their life, they can only remember dacoits," Modi said in a reply to Gandhi's 'Gabbar Singh Tax' jibe, recalling the iconic villain from the Bollywood blockbuster "Sholay".

"What kind of smartness is this... how has such an economist emerged here. You want to make goods used by the poor like clothes, footwear and food costlier and you want to make cigarettes and liquor cheaper," he said, ripping into the "anti poor" Congress over its criticism of the tax reform.

The prime minister went on to say that making cigarettes cheaper means bringing cancer in every home and asked which rich businessmen the opposition leader sought to benefit by making liquor cheaper.

Recalling the Macchu dam flood tragedy of 1979 in Morbi, the prime minister said he had spent one month working in the town after the disaster as an RSS and Jan Sangh worker.

"I remember then prime minister Indira Gandhi had come here and Chitralekha (a local language magazine) had printed her photo with a handkerchief over her nose, trying to avoid the stench, while another photo on the same front page had RSS workers carrying dead bodies," he said.

"Those who have helped us in times of difficulties should be remembered," he added.

Modi then went on to list how his government had worked to bring waters from the Narmada to the parched regions of Saurashtra and Kutch.

"The Congress' development model was giving hand-pumps. For the BJP it is the SAUNI scheme (the Narmada water project for Saurashtra region), where we will fill dams of Saurashtra through huge pipelines."

The culture of this parched land, Modi said, was to give respect to those who have tried to do something to provide water.

"The BJP has done many things and it should not be thrown out of power in the state for the next 100 years," Modi said.

Rahul Gandhi is also in Gujarat on Wednesday and Thursday and is expected to address multiple rallies.

Modi had on Monday pushed the BJP's campaign in his home state into a high gear by addressing four back-to-back rallies.

Elections to the 182-member Gujarat Assembly will be held in two phases on December 9 and 14. The votes will be counted on December 18.