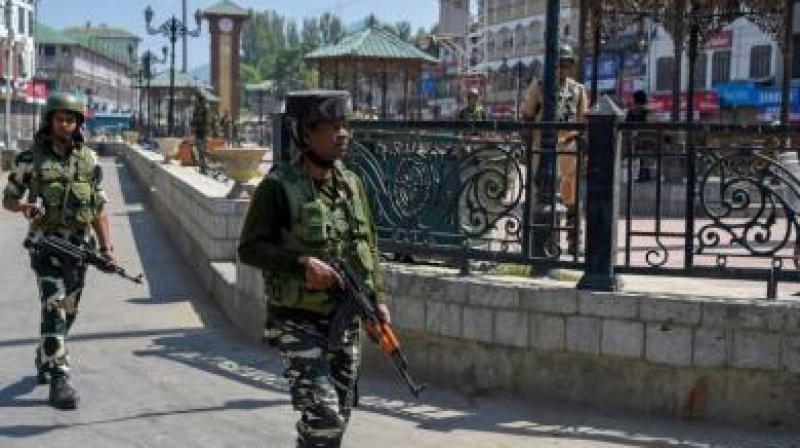 These two leaders are part of the 34 political detenues who were shifted to the MLA Hostel on November 17 from the Centaur hotel as the earlier detention centre lacked proper heating arrangements. (Photo: File)

Srinagar: Two former J&K MLAs, who were under detention for the last 116 days, were admitted to a hospital on Thursday night after their health condition worsened at the place they were kept at, officials said on Friday.

These former MLAs have been under detention since August 5 when the Centre announced abrogation of Article 370 and division of Jammu and Kashmir into two union territories -- Ladakh and Jammu and Kashmir.

The officials said both of them have been admitted to SKIMS and are undergoing cardiac-related tests.

Sagar, 61, has represented the Khanyar assembly seat in downtown Srinagar and has served in important positions in the cabinet of Farooq Abdullah as well as that of his son Omar Abdullah.

These two leaders are part of the 34 political detenues who were shifted to the MLA Hostel on November 17 from the Centaur hotel as the earlier detention centre lacked proper heating arrangements.

The winter chill had taken a toll on the health of the detenues -- National Conference, PDP and People's Conference leaders and prominent social activists -- and the security personnel guarding them.

The administration had carried out the required modification of rooms at the MLA Hostel to accommodate the political prisoners.

It has been declared as a subsidiary jail by an order of the Union Territory of Jammu and Kashmir's home department.

Kins of the detained leaders have been complaining about the make-shift subsidiary jail's poor facilities which includes inadequate heating arrangements to brave winters months in the Kashmir valley.

Many of relatives had brought warm beddings for their detained kins as there was no heating system at the MLA hostel.

"This is a defunct building which lacks basic facilities. There should be a hygienic place for these leaders. There are no heating arrangements, no proper lighting arrangements. We have to get these facilities ourselves rather than the government providing them," Shehriyar Khanum, daughter of former minister and Peoples Democratic Party (PDP) leader Naeem Akhtar, had told reporters earlier.

Similar views were expressed by other relatives which included Tanveer Veeri, brother of National Conference (NC) leader and former MLC Bashir Veeri, who had said last week that "it would be better if they are shifted to the MLA Hostel in Jammu or even the Central Jail. There are no proper heating or lighting arrangements at MLA Hostel, Srinagar."

Besides these leaders, three former chief ministers including Farooq Abdullah who is sitting Lok Sabha MP, were also detained.

Mehbooba Mufti was recently shifted to a government accommodation in the city from a tourist hut located at the foothills of Zaberwan range, Omar Abdullah is detained at another government house, a kilometre from his home.

Farooq Abdullah, who has been the chief minister of state three times, remained detained at his residence. On September 17, he was slapped with provisions of the stringent Public Safety Act.