Difficulty in finding the exit door also impeded rescue efforts, forcing nervous customers to lock themselves up in toilets. 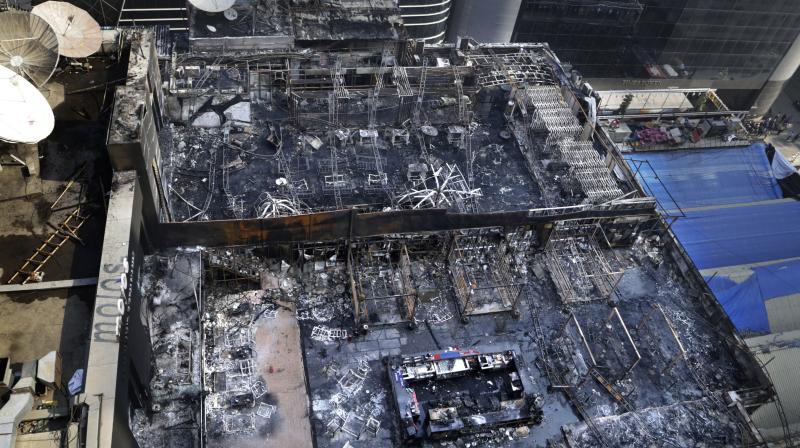 The fire started at rooftop restaurant ‘1 Above’ at Kamala Mills Compound in in Mumbai, killing 14 people. (Photo: AP)

Mumbai: Some patrons of ‘1 Above’ casually took selfies of the massive flames that leapt metres into the sky, while a few others lay immobilised in a drunken stupor, delaying evacuation from the pub, which was devastated in the blaze that killed 14 people in Mumbai, eyewitnesses said on Friday.

Difficulty in finding the exit door also impeded rescue efforts, forcing nervous customers to lock themselves up in toilets. The blaze at the rooftop pub during a party spread rapidly through the building, trapping many inside. Among those killed were 11 women, including Khushbu Bansali, who was celebrating her 29th birthday, and many of her friends.

“At around ten minutes past midnight, I got out of my office after hearing commotion. A sea of people came rushing at me. They were basically running wherever the pathway led them to,” Mahesh Sable, who works for a private security agency, told PTI. Sable said his agency provides security at the offices of news channel Times Now, which has satellite-linking equipment on the terrace adjoining ‘1 Above’ where the fire started.

He said some of them even insisted on taking refuge inside the security agency’s office on the terrace. “They came up by the lift and knew nothing about the place, like the proper exit. I guided about 150-200 people as I knew the way down,” he said.

Sable said some of the patrons ended up in restrooms because they did not know where the exit doors were. He said he went up again after guiding an initial lot of over 150 people to safety and was able to pull out 8-10 more with minor burn injuries. “We could hear calls for help, glasses were breaking, bottles were falling down, the entire place was in flames and engulfed by smoke. I could not go in again after getting the injured people out,” he said.

His colleague Sanjay Giri, who was also on the night shift, said he was on the ground floor and rushed up to guide the patrons who were stuck. Giri said initially the drunken stupor of some of the patrons and an obsession with getting videos of the rooftop pub engulfed in fire delayed rescue efforts. “I guided whoever we could see. It was later, after we went down, that they told us about their relatives and friends being stuck in the toilet. A few voice and video calls were also made,” Giri added.

Within a few minutes, officials from the fire brigade arrived and entered the structure after initial efforts to douse the fire, said Giri. He said those stuck in toilets were brought down. Sable and Giri said several LPG cylinders were kept on the ground floor, and sparks and burning debris fell on them. The fire brigade swiftly removed those cylinders. “The cylinders were full and if they had caught fire, the entire Kamala Mills compound would have been devastated,” Sable said.

Dr Sulbha Arora, one of the patrons, said people were falling and running over each other in the rush to get out of the building. “There was a stampede and someone pushed me. People were running over me even as the ceiling above me was collapsing in flames. I still don’t know how I got out alive,” she tweeted.