The victims of the blaze included a woman celebrating her 29th birthday and many of her friends, officials said. 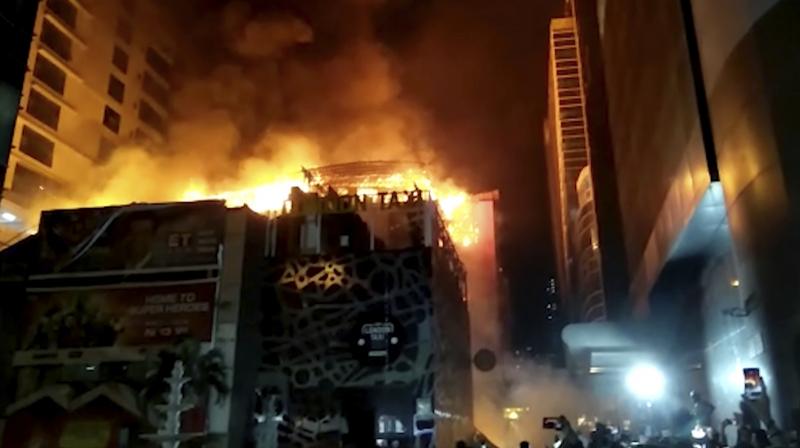 A number of people were killed and many more injured in a fire that broke out in a restaurant in Mumbai, India's financial and entertainment capital, early Friday. (Photo: AP)

Mumbai: The civic body of Mumbai on Friday started a crackdown on eateries and pubs in Kamala Mills Compound after 14 people died of suffocation when fire engulfed a rooftop restaurant in the complex.

“We have parallely started inspection of restaurants in Kamala Mills and Raghuvanshi Mills. In case of violations, we are taking immediate action,” G Ward officer Prashant Sakpale told The Indian Express.

The victims of the blaze included a woman celebrating her 29th birthday and many of her friends, officials said.

While 54 people were admitted for injuries to various hospitals, by evening 41 have been discharged, while 13 – eight men and five women – were undergoing treatment, civic officials said.

The police registered a case of culpable homicide against three people including pub owners, while the civic body suspended five of its officials.

The fire started after 12.30 am at the "1 Above" pub on the terrace of Trade House building in Kamala Mills compound in Lower Parel, a commercial hub housing several offices including national television channels.

From "1 Above" it spread to Mojo pub on the third floor, one level below, said an official of the Mumbai civic body, Brihanmumbai Municipal Corporation (BMC).

Most victims died of asphyxiation, said Avinash Supe, dean of the KEM Hospital where the victims were brought. 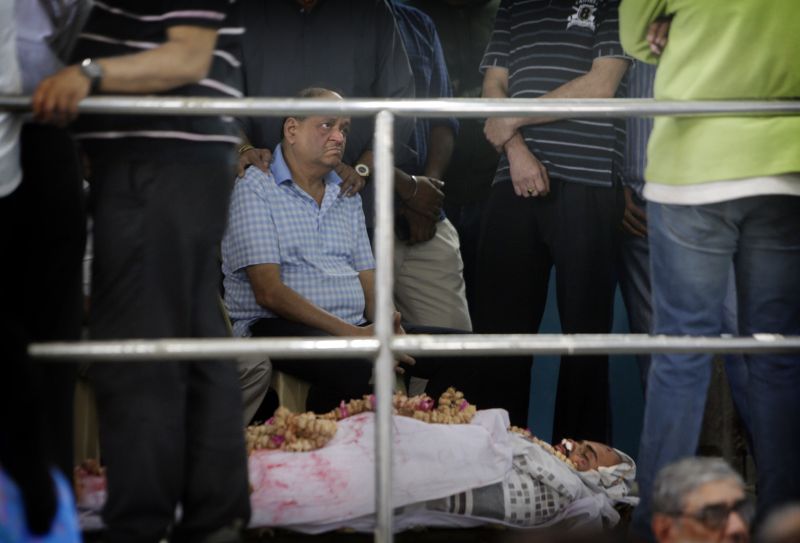 Jayant Lalani, sits next to the body of his son Vishwas Lalani, who lost his life in a restaurant fire, during his funeral in Mumbai on Friday. (Photo: AP)

Among the dead was Khushbu Bansali who was celebrating her birthday and 10 other women, according to the official list of victims.

"The hotel had put up a temporary structure supported by bamboo, with the possibility of catching fire. There was no fire extinguishing facility either. It is the responsibility of the police and civic authorities to act against any violations," he said.

Employees of news channels located in the complex had a narrow escape. "I was in the night shift. We heard people screaming at the pub. Initially, we thought it is due to the party which was underway there," said Sanjay Jadhav, a programme producer of a news channel.

"When I came out of my office, I saw that a fire has broken out at the roof-top pub. The main entrance of our office was blocked due to the flames," he said.

The massive blaze engulfed the entire building in about 30 minutes and took several hours to be put out. The cause of the fire is not known yet.

Dr Sulbha KG Arora, a Mumbai doctor, told NDTV news channel that she was at the ‘1 Above’ restaurant. "There was no time for anyone to reach out because the fire spread so rapidly. The staff members of the restaurant were trying to help the customers as much as possible," she said.

"There was a stampede and someone pushed me. People were running over me even as the ceiling above me was collapsing in flames," she said separately in a tweet. "Still don't know how I got out alive."

Teams of fire brigade and police rushed to the spot and initially 35 injured people were pulled out from inside the pub and taken to hospital, a police official said.

Police have booked Hratesh Sanghvi, Jigar Sanghvi and Abhijeet Mankar of C Grade Hospitality which manages the pub, along with others, under various charges including culpable homicide not amounting to murder. DCP Virendra Mishra told PTI that so far nobody has been arrested, and "look-out notice" will be issued for the accused. 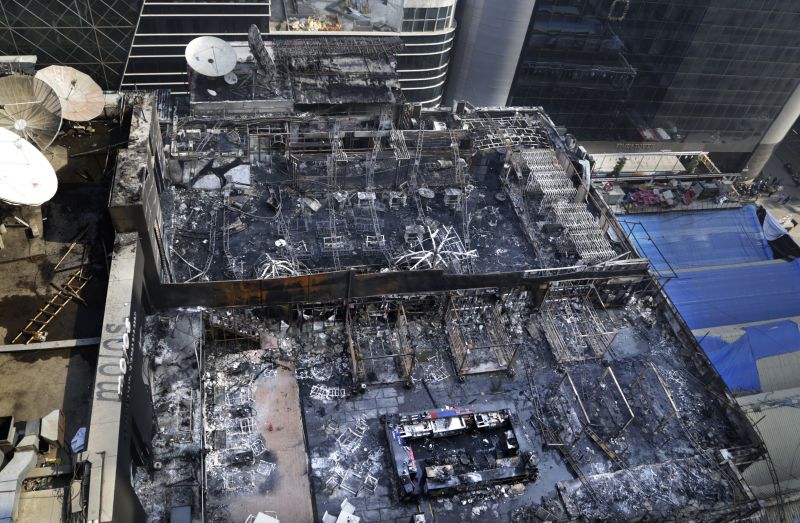 A totally charred roof top restaurant is seen among other high-rise buildings in Mumbai on Friday. (Photo: AP)

The civic body, on its part, suspended five officials including those attached to the G-South ward for dereliction of duty. There are allegations that civic authorities turned a blind eye to construction irregularities and violation of fire safety norms in the compound.

According to civic officials, the BMC had issued licence for the 1 Above pub in the name of Kripesh Sanghvi and Abhijeet Mankar, while that for Mojo pub was issued in the name of Yug Pathak.

"Anguished by the fire in Mumbai. My thoughts are with the bereaved families in this hour of grief. I pray that those injured recover quickly," the Prime Minister's Office tweeted.

Maharashtra Chief Minister Devendra Fadnavis also expressed grief, and said he has directed the BMC commissioner to conduct an inquiry. Action would be taken against errant civic officials as well as owners of the pub, he said, while also ordering safety audit of such structures across the city and demolition of illegal structures.

BJP MP Kirit Somaiya said he had asked Fadnavis and the BMC commissioner to order a special fire audit of all such pubs and 'hooka parlours' in Mumbai.

"Several such establishments at the Mills compound are illegal, part of which was regularised lately. The place where the blaze took place was illegal," he claimed.

The same central Mumbai area – a former textile mill district now dotted by swanky glass-and-concrete towers – had witnessed death of over 20 people in a stampede at a railway bridge on September 29 this year.