Dhankhar said that 'efforts to ensure improvement in education scenario seem to be bearing results'. 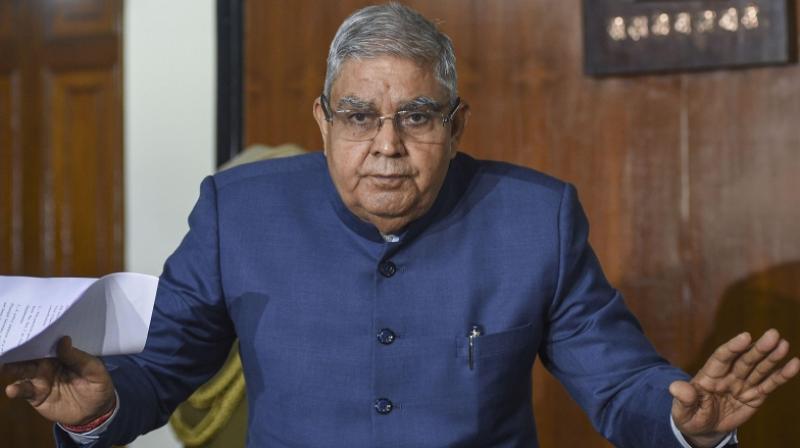 Dhankhar had on Saturday shared on the micro-blogging site a letter sent to him by Chief Minister Mamata Banerjee, in response to his offer for talks over matters related to state-aided varsities. (Photo: File)

Kolkata: Snubbing Governor Jagdeep Dhankar's proposal to hold a discussion over the recent programme cancellations and protests at state-run varsities, Bengal minister Partha Chatterjee on Sunday took to Twitter to provide the state government's perspective on the incidents.

Dhankhar had on Saturday shared on the micro-blogging site a letter sent to him by Chief Minister Mamata Banerjee, in response to his offer for talks over matters related to state-aided varsities.

The CM, in the letter, said the subject "pertains to the Department of Education, I am forwarding the letter to Minister-in-Charge Education department Partha Chatterjee to discuss all issues with you at a convenient time".

Attaching an image of the official communication from the CMO, Dhankhar, who is also the chancellor of state universities, said that "efforts to ensure improvement in education scenario seem to be bearing results".

Chatterjee, however, chose to tweet details of programme cancellations and the December 24 incident at Jadavpur University (JU), when Dhankhar was stopped from entering the campus by non-teaching employees -- triggering a fresh war of words between the two sides.

The governor said he was "frankly amused" with the education minister's gesture.

In his tweet, Chatterjee wrote, "As you (Dhankhar) have posted a letter of Hon'ble CM to you on a social media platform, I (am) hereby posting necessary details through the same mode for your kind information..."

The dates of formal programmes pertaining to universities "are fixed and chalked out and cancelled depending upon the circumstances by the Vice Chancellors. The universities are autonomous bodies and the state government hardly interferes in the discharge of their duties and responsibilities based on available rules 2019," he said in his missive to the governor.

Referring to the December 24 incident at JU, when Dhankhar was barred from entering the campus and protests at the varsity the day before, the minister said, "incidents happened as the students were agitating against the proposed implementation of National Register of Citizens, CAA and NPR by Centre".

"The students and people of the state reportedly want the withdrawal of the same and are dead against implementation of it in West Bengal," he said.

Chatterjee also clarified that he was "ready to work with the chancellor, provided his approach is cordial" and amicable, in the best interest of the education department.

The minister also highlighted the achievements of the school education department in his tweet.

In his reply, Dhankhar said it was not the time for "tit for tat".

"Am frankly amused. Hon'ble CM's communication reflected farsighted approach and hence my step. Hon'ble Minister may check a critical communication of CM was on screen of all channels. No time for tit for tat. Hope we'll move ahead as indicated by CM and discuss issues across," he wrote on his Twitter handle.

Quizzed by reporters, Chatterjee had on Saturday expressed his dismay over the fact that the governor posted on social media an official letter sent by the CMO.

"We (the higher education department) will first give a detailed reply to some of his questions on the state universities. If he still has some more queries, we will take a call (about any further meeting) later on," he had stated.

Dhankhar had said on December 24, after the JU fiasco, that the situation in the state was indicative of a "massive downslide" in the education sector.

He told reporters at Raj Bhavan 24 that he would like to meet the chief minister to discuss the matter.