Apart from being a revered spiritual leader, Theertha Swami was also well known for his social and educational work. 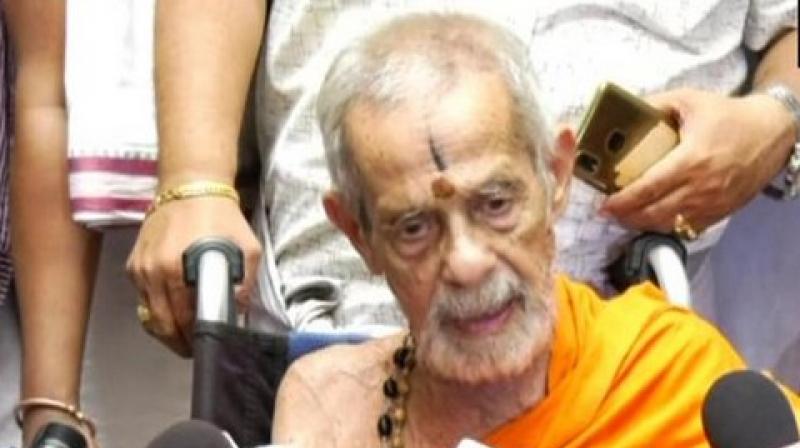 Earlier on Saturday, he was admitted to Kasturba Hospital after his condition became critical. Later he was transferred back to Udupi Sri Krishna Mutt with ventilator support. Since morning special prayers were also held for the recovery of Teertha Swami.

Apart from being a revered spiritual leader, Theertha Swami was also well known for his social and educational work.

He was also active in Ram Janam Bhoomi movement and was a vocal supporter of cow protection movement.

Prime Minister Narendra Modi on Sunday condoled the death of Swami Vishwesha Teertha of Pejawar Math, saying he will remain in the hearts and minds of lakhs of people.

"Sri Vishvesha Teertha Swamiji of the Sri Pejawara Matha, Udupi will remain in the hearts and minds of lakhs of people for whom he was always a guiding light," the prime minister tweeted. He said the seer was a powerhouse of service and spirituality and continuously worked for a more just and compassionate society.

Chief Minister B S Yediyurappa condoled the death of the seer, who was the 33rd swamiji in the lineage of the Pejawar Math heads.

"Pejavara Mutt Seer Vishwesha Teertha Swami ji passed away at 9:30 am today. His mortal remains will be kept at Ajjarakadu Mahatma Gandhi Maidan for three hours today, where he will be given state honours. Chief Minister BS Yediyurappa will also pay a visit," Bhat said while speaking to reporters here.

He also stated that Pejavara Mutt seer's mortal remains will be kept for the public to pay its final tributes in Bengaluru, before being cremated at the evening.

"Later today, his mortal remains will be taken to Bengaluru. Several national leaders will be coming to pay last tributes to Swami ji at the National College in Bengaluru. Last rites will be performed at around 7 pm at Vidyapeeth," he added.