THE ASIAN AGE. | P A JEBARAJ

According to police, Chaitanya’s pant pocket contained an I-phone that was damaged in the fall. 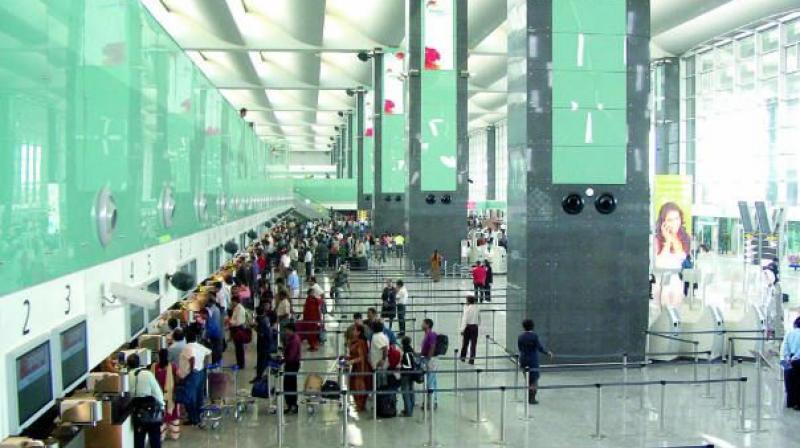 Preliminary probe revealed that he hailed from Vijayawada and was working in a software company at Bengaluru.

Chennai: Mystery shrouds the tragic death of a 28-year-old techie after falling 35-40 feet from the departure level on the second floor of the Chennai airport to the ground below in the early hours of Monday.

The police said the man, later identified as Chaitanya Vuyuru from his belongings in the bag he had left behind at the flyover railing near Gate No.4, sustained severe head injuries and died on the spot. Preliminary probe revealed that he hailed from Vijayawada and was working in a software company at Bengaluru.

While some officials at the airport maintained that the man could have committed suicide, considering that the railing at the flyover where he was seen standing before the fall was at a safe height and falling off accidentally was just not possible, it appears that Chaitanya’s family insisted that he had “absolutely no reason” to contemplate ending life as he was quite cheerful and had no problems whatsoever either at home or at the place of work.

However, investigators are looking into all the possible angles of the mysterious tragedy, which occurred around 0640 hours. “The man had left his bag on the top, from where he had fallen off. And he had left his footwear next to the bag. Why would he take off his footwear if he was merely walking around speaking on the phone or taking selfies?” wondered an officer, requesting anonymity.

Also, it appeared that Chaitanya left home in Vijayawada on Saturday telling his family that he was returning to work at Bengaluru but for some reason, headed for Chennai.

According to police, Chaitanya’s pant pocket contained an I-phone that was damaged in the fall. However, the sim-card recovered from the phone showed that he was speaking to someone on the phone when the mishap occurred. When the number was dialed, the person on the line identified himself as a friend of Chaitanya.

The friend told the police that Chaitanya had contacted him saying he was in Chennai but the former told him he had gone to Puducherry for the weekend and would return only on Monday. Chaitanya then told him he would wait for his return and stay at some place in the city, but meanwhile he would also meet another friend at the airport early Monday. “Just before the death, Chaitanya told his friend Puducherry that his friend did not turn up at the (Chennai) airport and he was still waiting”, said an officer.

Chaitanya’s bag contained another mobile phone, an ATM card, a driving licence and the ID card of the Bengalur IT company, according to the police.

Police removed body to the Chromepet GH for postmortem on Tuesday, after which it would be taken to Vijayawada by Chaitanya’s brother who arrived in the evening. A case under section 174 (unnatural death) of the CrPC has been registered.