The J&K police had very next said that there were “credible inputs” pointing towards the involvement of Lashkar-e-Tayyaba in the gory incident. 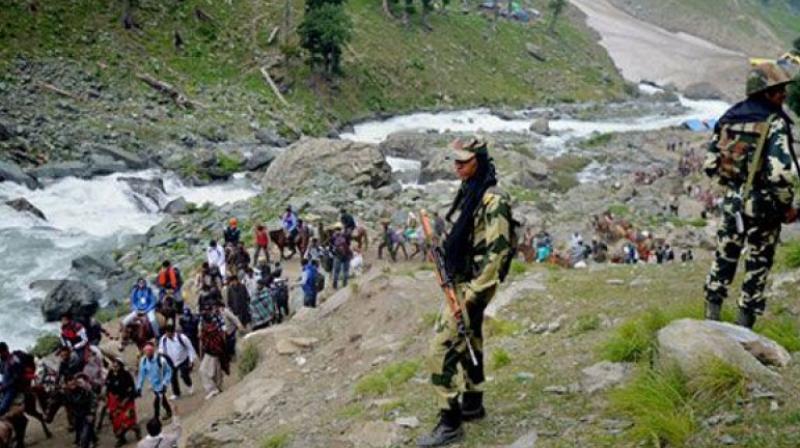 The gunmen had targeted a tourist bus carrying pilgrims mainly from Gujarat which was on way to winter capital Jammu from Baltal, a base-camp of the Amarnath yatra, at Botengo in Anantnag district on July 10 last year. (Photo: PTI)

Srinagar: The Jammu and Kashmir police on Monday filed chargesheets against eleven persons, including three Pakistani nationals, for their alleged involvement in July 10, 2017 terror attack in which eight Amarnath pilgrims were killed and ten other injured in southern Anantnag district.

The 1,500 page charge sheet has been filed two courts in Anantnag which are simultaneously hearing the case registered by the police under various sections of Ranbir Penal Code including 302 (murder), 307 (attempt to murder), 326 (voluntarily causing grievous hurt by dangerous weapons or means) and 427 (causing mischief) and other relevant laws. The gunmen had targeted a tourist bus carrying pilgrims mainly from Gujarat which was on way to winter capital Jammu from Baltal, a base-camp of the Amarnath yatra, at Botengo in Anantnag district on July 10 last year. Seven pilgrims were killed on the spot and one of the eleven persons injured in the attack had died in hospital later.

The J&K police had very next said that there were “credible inputs” pointing towards the involvement of Lashkar-e-Tayyaba (LeT) in the gory incident. However, the LeT had strongly denied the charge and sought to blame the killings on Indian agencies.

A statement issued by the J&K police here on Monday that a Special Investigation Team (SIT) which was formed to probe the incident has filed the charge sheet against the accused.

“During the course of investigation it was established that Pakistan-based based LeT terrorists were involved in the attack. Further, on the basis of evidences collected during the course of investigation complicity of eleven people was established, out of whom four persons including one juvenile were arrested in the instant case,” the statement said.

The police also said that during the course of investigation “evidences have been brought on record establishing complicity of above mentioned accused persons in the instant crime”. It said that the main accused Abu Ismail alias Haroon (a Pakistani national) was killed in an encounter with the security forces at Arigam, Nowgam area of Srinagar on September 14, 2017 whereas other two Pakistani nationals Maaviya and Furqan along with local militant Yawar Bashir Wani were killed in a similar clash at Qazigund (Kulgam district) on December 12, 2017.

Three of the accused Khalid Muzaffar Dar, Tanveer Ahmad Dar and Sarjeel Ahmad Sheikh are “absconding”. Three others Aijaz, Bilal and Zahoor were arrested and are presently in the judicial custody whereas the arrested juvenile is presently on bail.