Union minister Giriraj Singh claimed that media would have chosen a 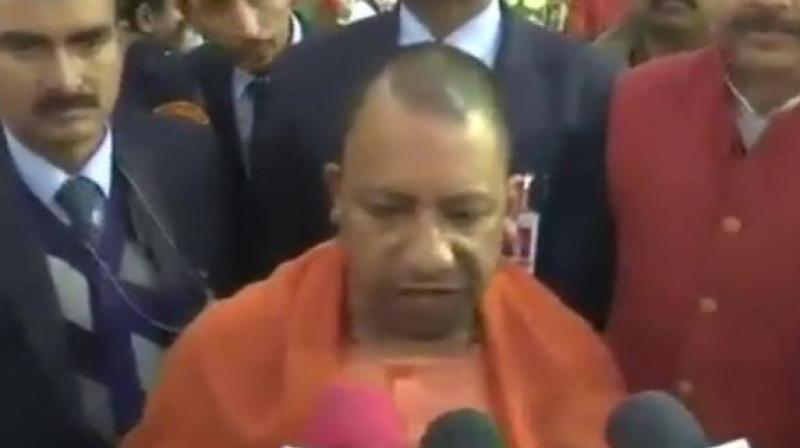 "Our government is committed to provide security to each and every citizen. Anarchy has no place in the state," Chief Minister Adityanath told reporters in Lucknow, his first comment on the clashes. (Photo: ANI/ Twitter)

Lucknow: Chief Minister Yogi Adityanath on Tuesday broke his silence on Kasganj violence promising action against those involved even as politics brewed over the clashes with Union minister Giriraj Singh claiming that media would have chosen a "different" line if the killed youth was from the minority community.

Another BJP hardliner Vinay Katiyar, known for his controversial utterances, also waded in the row saying there were some "miscreants who support Pakistan" who could go to any extent to defy the tricolour.

"Our government is committed to provide security to each and every citizen. Anarchy has no place in the state," Chief Minister Adityanath told reporters in Lucknow, his first comment on the clashes.

Adityanath warned of "strict action" against the perpetrators of violence.

Meanwhile, Union Minister Giriraj Singh said that he felt the violence was pre-planned.

"Had the deceased been Mohammad Ismaayil instead of Chandan Gupta, there would be been a different debate in the media... We have to change this mindset," Giriraj Singh told reporters in Lucknow.

The Union minister said he felt the Kasganj incident was "pre-planned" adding that the Adityanath government would not spare anyone involved.

Also read: Wasn't present in Kasganj during riots, I am fine: Rahul Upadhyay

"I have come to know that a bureaucrat has made some remarks on why some are raising 'Pakistan Murdabad' slogans. I want to ask why not raise Pakistan Murdabad slogan. We raise this slogan as Pakistan kills our soldiers and is involved in spreading cross border terrorism," the minister said.

The DM's now-deleted post said a "strange trend" that had begun of late was to visit Muslim majority areas and raise
slogans against Pakistan.

"Why? Are they (Muslims) Pakistanis?" The same thing had happened in Khailam village of Bareilly. Then stones were thrown, FIRs lodged," the officer's post had said.

A short service commission Army officer before joining the civil services, Raghvendra Vikram Singh, 59, was last year posted as the district magistrate of Bareilly, about 100 km from Kasganj.

He put up the Facebook post on Sunday, just two days after 22-year-old commerce student Chandan Gupta died in communal clashes that broke out in a Muslim-majority locality of Kasganj during a 'Tiranga bike rally' by members of the local unit of the RSS-affiliated students' group ABVP.

Minister of State for Food Processing Sadhvi Niranjan Jyoti said the incident should not be politicised.

BJP MP Vinay Katiyar, however, told a news channel that those who "support Pakistan" were behind the violence.

"Earlier, there were no communal clashes in Kasganj district as all lived in harmony. But it has come to light that there are some miscreants who support Pakistan and will go to any extent to defy the tricolour. They need to be dealt with strictly," he said.

Katiyar claimed Gupta, who died of a bullet injury, was killed by the "supporters of Pakistan".

"Nothing like this had happened in the state under Yogi Adityanath's government, this is a first such incident which has taken place," Katiyar asserted expressing confidence that action will be taken.

Stray incidents of violence were reported from the western Uttar Pradesh town which continued to be tense with a heavy deployment of RAF and PAC personnel to keep a check on rumour mongers and trouble makers.

A shopkeeper's store was burnt down in the communal violence-hit district last night.

"I have been living and working here for the past 20 years. Even though I am the only Muslim among a Hindu majority, we never had any problems," the shopkeeper said.

Meanwhile, a middle-aged person, Rahul Upadhyay, on Tuesday scotched rumours being spread on the social media that he was killed in clashes.

"One of my friends informed me about rumours on the social media about me getting killed during the violence, but I was not present in Kasganj. I had gone to my village and am absolutely fine," Upadhyay said.

The Uttar Pradesh government has come under fire over the clashes with even Governor Ram Naik terming the Kasganj violence a "blot" on the state.

Opposition parties have also attacked the state government over the clashes.

The Adityanath government has already replaced the district's Superintendent of Police.

Director General of Police OP Singh has said those behind the violence will be dealt with under the ambit of the National Security Act.

Over 100 people have been sent to jail under various sections of the Indian Penal Code for their alleged role in the violence.

A Peace Committee has been formed by the district administration.

It has been doing the rounds of the troubled areas requesting people not to pay heed to rumours.

Some illegal arms were also recovered during raids, an official said.