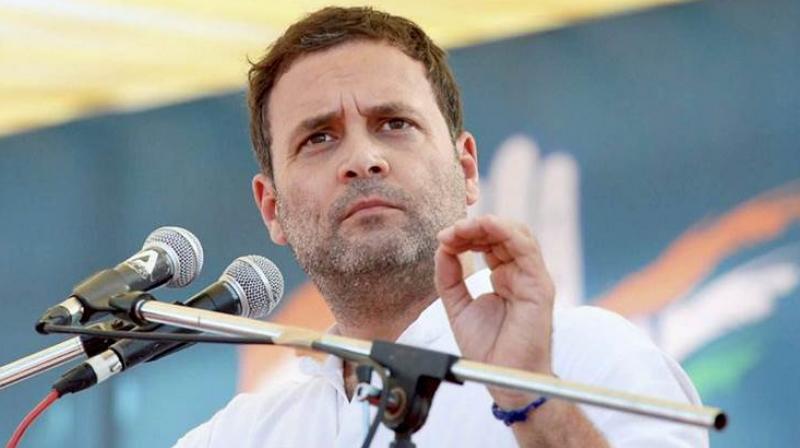 Congress President Rahul Gandhi also tagged a video of the song 'Don't worry be happy' with the tweet. (Photo: PTI/File)

New Delhi: Congress President Rahul Gandhi on Monday took a swipe at the Modi government after the Economic Survey was released, saying 'Acche Din' are here, except for "minor hiccups" such as a decrease in the growth of GDP (gross domestic product), agriculture and job creation.

Shedding the impact of the GST (goods and services tax) and demonetisation,

India's economy is "picking up quite nicely", and will expand by 7-7.5 per cent in 2018-19 to again become the world's fastest growing major economy, the Economic Survey released on Monday said.

Reacting to the survey, former finance minister and senior Congress leader P Chidambaram hit out at the government over the "depressing" report and predicted a growth rate of 6-6.5 per cent for 2017-18.

He also tagged a video of the song "Don't worry be happy" with the tweet.

The #EconomicSurvey2018 says, #AccheDin are here, except for these minor hiccups:

Chidambaram said though the survey says growth rate for 2017-18 will be 6.75 per cent, implying a second half growth rate of 7.5 per cent, it offers little evidence in support of this claim.

"The growth rate in the first half was 6 per cent, and the year is likely to end with a growth rate of between 6 and 6.5 per cent.... Altogether, it is a depressing report of the fiscal year that will come to an end in two months," he said.

Agriculture is India's lifeline and the Economic Survey recognises that, but "causing 'agrarian distress' has become the designed objective of the Modi government", he said.

"With another year to go for the general elections, even if the agriculture-GDP growth jumps to 4 per cent in 2018-19, the five-year average will still be 2.3 pc, the lowest since the economic reforms began," the former finance minister said.

He also said the agriculture-GDP growth under the Modi government has plunged to just 1.9 per cent, half of what was achieved in the first four years of the UPA.

"Reason is deliberate betrayal of India's farmers by PM on the promise of cost plus 50pc of MSP," he said.

Congress's communications in-charge Randeep Surjewala said, "All in all it has turned out to be 'much ado without direction, cohesion and vision'!"

"With one year to go for next General Elections, Prime Minister Modi has plunged the 'state of India's Economy' towards despondency, dejection and dire straits," he alleged.

He said that 'Modinomics' had 'decoupled' India's robust economy by "myopic vision and the double whammy of demonetisation and ill-conceived GST".

Surjewala alleged that the Economic Survey establishes that Modi government has become synonymous with "distorting" macroeconomic indices and "slowing down economic progress".

"Economic Survey 2017-18 has affirmed the utter mismanagement of India's economy by Modi government in the last four years. No amount of new announcements in the Presidential address and the forthcoming budget can undo the damage the BJP government has done to a robust economy like India," Surjewala said.

He claimed the GDP growth is down, agriculture is in "utter disarray", rural wages were declining, industrial growth was plunging, job creation figures were invisible, fresh investment was low, education and health spending is in crises.

He also claimed that that the 'Make in India' was "floundering", price rise was raising its ugly head, and due to demonetisation and a 'flawed' GST, the informal sector, which by the Economic Survey's own admission, has been severely impacted.

Surjewala said though the Budget 2017-18 predicted a GDP growth of 7.5 pc for 2017-18, the finance minister has turned out to be more than a full percentage point off the mark.

Chidamabaram said the future course of the economy is conditional "on many ifs" and the survey seems to prepare grounds for "failure" and the "outlook is therefore uncertain, if not bleak".

"The Survey has thrown the burden on private investments and exports. It is obvious that the government has thrown in the towel and hopes that the private sector will come to the rescue of the economy! There is not much gas left in the government," he said.