If Priyanka is Cong’s Brahmastra, what is BJP’s?

In sports, it’s a well-known fact that when a weak player plays against a strong opponent, he or she starts playing better. 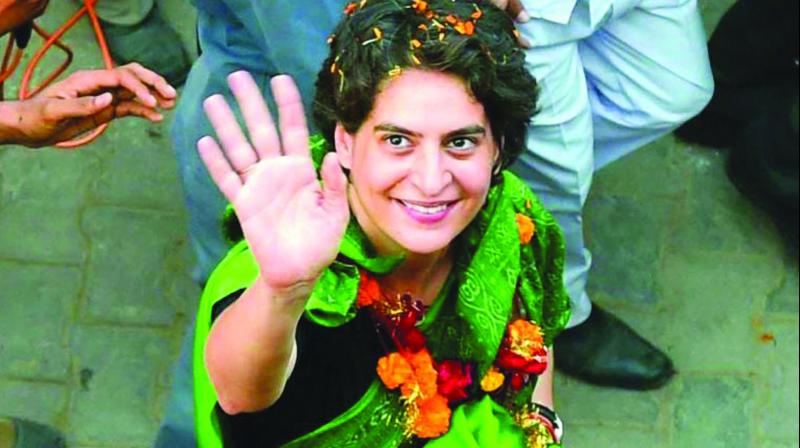 Politics in India is getting interesting. Political parties are refining their election strategies as the country inches closer to the next general elections. Almost every other day there is some new political development that makes the forthcoming elections more exciting — the latest being Priyanka Gandhi Vadra’s formal entry into active politics. By making Ms Priyanka the All India Congress Committee general secretary of UP East, the Congress has used its Brahmastra – the ultimate weapon.

In sports, it’s a well-known fact that when a weak player plays against a strong opponent, he or she starts playing better. The same logic applies in politics too. For example, the use of data analytics and social media — once a key weapon of the BJP to understand and connect with voters as well as the party functionaries to devise election strategies — is now being deployed by the Congress too. Can the weak player become so strong as to defeat the opponent? Well it depends on the opponent’s counter-move based on its own learning. So, what could be BJP’s Brahmastra? It doesn’t necessarily have to be a person. It could be a vision, a strategy, an event/episode or a public narrative.

Could it be the Modi government’s development record of the last 4.5 years? Undoubtedly, the Modi government has delivered impressive development results from both equity and efficiency perspectives. His government has pursued broad-based development by prioritising interventions in such a manner as to benefit the cross-section of the society be it youth, women, farmer, budding entrepreneurs, the differently abled, the elderly and so forth. While many programmes of his government remain work-in-progress, some programmes have delivered tangible results on the ground for everybody to notice. It is also the case that these achievements have come alongside transitional costs to the general public of some tough decisions of his government. But all this is behind us now. All that the government could do now is to continue reminding the public of its achievements over the last 4.5 years.

Further, the Modi government is launching and inaugurating a slew of new projects in various states – in both BJP-ruled and non-BJP-ruled states – which should definitely yield some electoral gains. But more than the real development, it is the development narrative that will play out between now and the next elections.

Could it be soon-to-be-announced sops in the forthcoming Budget? Political compulsions may see the Modi government resorting to giving some sops especially for the distressed farmers, the youth and the middle class in the forthcoming Budget. In all likelihood, those sops would merely remain announcements until the new government comes to power. The buzz around those announcements may translate into some electoral gains. As for the discernible voters, they will see through the logic of the sops not being in their longer-term interest if sops in some areas give rise to pain in other areas. So, the real value of sops must be seen in the larger context, that is, how those sops would affect the public in other areas. So, the noise around these sops could deliver some electoral benefits but not huge benefits.

Could it be going hard on the fugitive economic offenders? Well, if the Modi government is able to get even one of the three well-known fugitive economic offenders viz., Vijay Mallya, Nirav Modi, and Mehul Choksi back to India before the general elections, it will mean a symbolic victory for the Modi government’s fight against corruption. Such an outcome, either through a legal process or otherwise (say moral suasion), will also disarm the opposition from playing the corruption card against the government. This move will likely get PM Modi huge thumps-up from the general public. Again, this is likely to translate into some electoral gains but not hugely.

Could it be Modi’s own persona and fitment for the job? PM Modi is seen by the public as a great visionary and a strong leader capable of taking India to newer heights. If there is any candidate that has all the required credentials to be the Indian PM, it is Modi himself. His commitment to India’s growth and development is beyond doubt and, in the absence of any personal encumbrances, he is in a position to devote himself fully to the mission. He has the advantage of experience and brings high energy levels needed for the job. Indeed, he has the track-record of delivering development and presiding corruption-free administration.

Not only has PM Modi a huge fan following within India, he is also much respected and admired among international leaders. It’s hard to think of any person from the so-called Mahagathbandhan (grand alliance) parties possessing these credentials. Equally, it’s hard to imagine any leader from this Mahagathbandhan representing India, say, in G-20 gathering and commanding the same respect as PM Modi does.

Talking of public narrative, it needs a clever crafting. Besides including the usual stuff of highlighting oppositions’ errors of omission and commission, doubting their intentions and capabilities, bringing out their contradictions and inconsistencies, the public narrative has to balance it with the achievements and strengthens of the ruling BJP. Can the BJP’s election communication team do it?