India   All India  30 Mar 2017  Maharashtra: 5 die due to heat stroke as temperatures surge
India, All India

Maharashtra: 5 die due to heat stroke as temperatures surge

The department has issued a warning of heat wave in parts of north Maharashtra for next 48 hours. 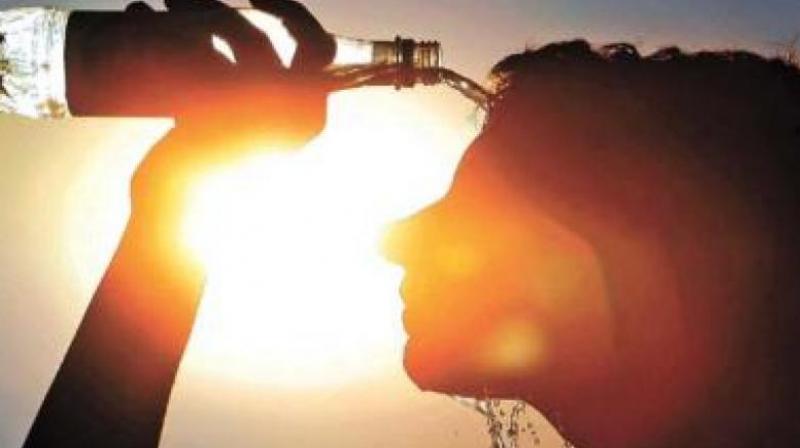 Bhira in Maharashtra tops the list of hottest cities in India with a maximum temperature of 46.5°C. (Photo: Representational Image)

Mumbai: Five people have died of heat stroke in Maharashtra so far and temperatures exceeding 40 degrees have led the Indian Meteorological Department (IMD) to issue warnings of a heat wave in parts of the state.

The department has issued a warning of heat wave in parts of north Maharashtra for next 48 hours, said ANI.

Districts in central and north Maharashtra are the worst affected, said an NDTV report.

Bhira in Maharashtra tops the list of hottest cities in India with a maximum temperature of 46.5°C. However, IMD is skeptical of the claim and has sent a team to examine the temperature there.

Many other parts of India are suffering record temperatures at the start of summer.

Barmer in Rajasthan recorded a high of 43.4 degrees Celsius while Narnaul in Haryana sizzled at 42 degrees, nine degrees above normal.

The temperature in Ludhiana in Punjab is 7 degrees above normal.

The temperature in Uttarakhand's capital, Dehradun as well as Srinagar has been recorded much above normal for this part of  the year, the NDTV report said.

In Rajasthan, Barmer was the hottest with mercury touching 43.4 degrees, followed by 43 degrees Celsius in Churu.

Heat wave conditions will prevail at isolated regions in Gujarat before temperatures across the state return to normal in 2-3 days, according to the IMD.

Ahmedabad touched 42.8 degrees on Monday, breaking a seven-year record for the month of March.

IMD on Wednesday said Delhi has been witnessing an unusual temperature of 23 degree in the wee hours, which is already six degree more than normal.

IMD scientist Charan Singh told ANI, "Delhi has been witnessing temperature of 23 degree in the wee hours which is very unusual in the month of March."

He further said that the maximum temperature is expected to reach 38 degrees which is recorded to be higher compared to last five to six years.

The department forecasted that Delhi has not witnessed heat-wave condition but the temperature in the national capital might increase till the month of May. The temperature is currently at 37 degrees, five degrees more than normal for this time of the year.

Singh further said that heat wave condition is likely to continue in states like Rajasthan, Gujarat, west Madhya Pradesh for next three to four days.

"We can witness heat wave in Rajasthan Gujarat, Madhya Pradesh for next two to three days and it has already spread in South Haryana and South Uttar Pradesh,” he added.

Most parts of India will come under heat wave temperature by mid of May," Singh added.

Mercury has been settling in at higher than 40°C at almost every place.