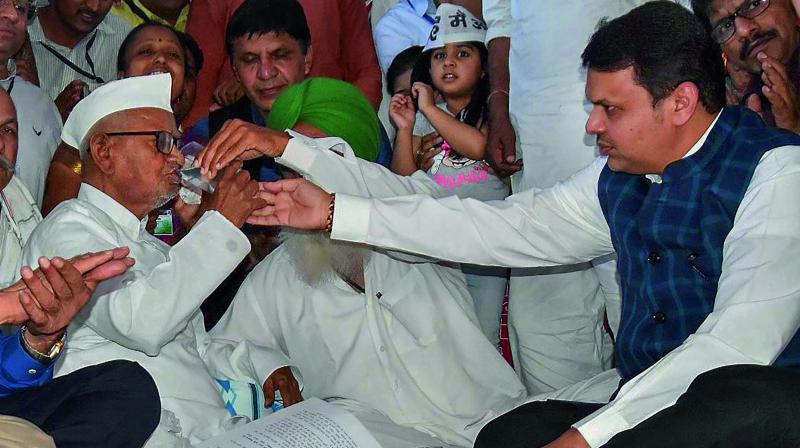 New Delhi: Gandhian and social activist Anna Hazare, who has been on an indefinite hungerstrike in Delhi for a week over his demands for a Lokpal, has broken his fast after Maharashtra chief minister Devendra Fadnavis met him on Thursday.

Mr Hazare said that he is giving the government six months time, till August, to come good on its assurance and warned that his protest will again begin in September if the demands were not met.

“The Lokpal issue is still pending. Our chief minister is saying the issue will be solved within six months. The government and the public are not separate entities. It is the duty of the government to do good for the people,” he said after ending his hungerstrike. Mr Hazare had been protesting at the Ramlila Maidan in the heart of Delhi — the same ground where his stir for an anti-corruption body seven years ago caught the country’s imagination. In 2011, he undertook a similar hunger strike for Lokpal or national ombudsman. His agitation in Delhi had led to the passing of the Lokpal and Lokayuktas Act 2013. However, the Centre is yet to appoint a Lokpal.

This time, Mr Hazare is also demanding that the government ensure better minimum support price for farmers’ agro produce to address the agrarian distress. The 80-year-old anti-corruption activist’s demands include appointment of Lokpal at the Centre and Lokayuktas in the states, and giving better prices to the farmers for their yield.

“They (government) have assured us that they will make the appointments as soon as possible. I will see till August and we will begin again in September. It should be done within a time frame. Chief minister Fadnavis has said that it will not even take six months. We will see,” Mr Hazare said.

“Meanwhile, a man hurled a shoe at the stage where Mr Hazare, Mr Fadnavis and Union minister Gajendra Singh Shekhawat were present. It is yet unclear as to whom it was aimed at. The person, who threw the shoe, was whisked away by the police.