Bullets, aero-bombs, mortars had rained on them from all around before they could get the first bite of their food. 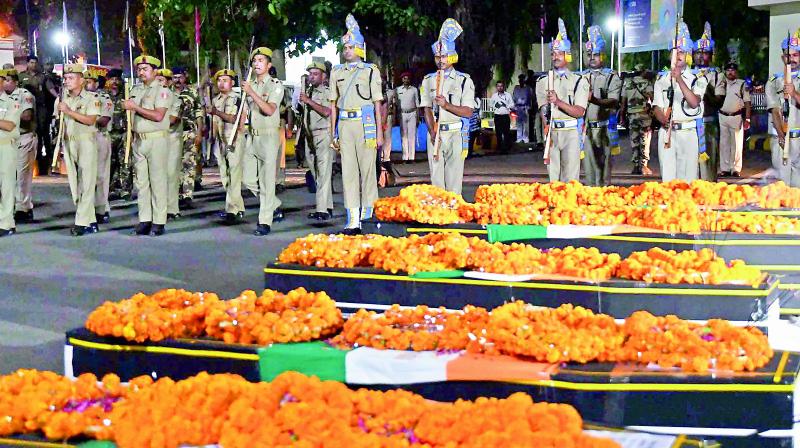 Jawans give a gun salute to martyred CRPF personnel at Patna on Tuesday. (Photo: PTI)

Bhopal: Twenty-five infantrymen of CRPF, who were slain in a guerrilla ambush by Left-wing insurgents in Chhattisgarh’s south Bastar district of Sukma on April 24, were hardly aware that the sunrise of that black Monday would be the last one in their life when they set out in the early hours of that fateful day to guard a under-construction road barely five km away from their camp.

They were leading a road opening party (ROP) comprising 99 jawans of 74th battalion of CRPF whose mission was to sanitise the area and provide security to the workers engaged in the construction of seven km-long Burkapal-Chintagufa, a section of 57 km Dornapal-Jagargunda road, that crisscrosses through the Maoists’ core area in Bastar region.

The Delta (D) company of the paramilitary force with the Charlie (C) company of the battalion in its tow had encountered unusual developments — a villager herding cattle making strange noisy sounds, another passing them in cycle and a group of women carrying firewood on their head — on their way to the construction site. But they had ignored them for which they had to pay with their lives. At around 12.55 in the afternoon, the troopers chose an elevated place shadowed by a big tree at the site to have lunch.

Bullets, aero-bombs, mortars had rained on them from all around before they could get the first bite of their food.

“Twelve jawans died in the first firing itself. The guerrillas, hiding in the dense forest barely 300 meters from ambush site, had trapped the ROP in a U-shaped ambush giving them little chance to escape. Thirteen jawans who were in the tail of the ROP were gunned down in simultaneous Maoist attack”, a CRPF officer recounted the attack scene.

Huge quantities of weapons enough to raise two military companies, were looted by Maoists. Some CRPF jawans, injured in the attack, had had accused local police and villagers of complicity with Maoists. DGP (Naxal operation) D.M.

Awasthi rebutted the charges and said, “State police is capable enough to tackle Naxal menace on its own”, forcing the Centre to step in and prod both forces to pull up their shocks.