In a notification, the national carrier said Kathpalia will take charge from Wednesday. 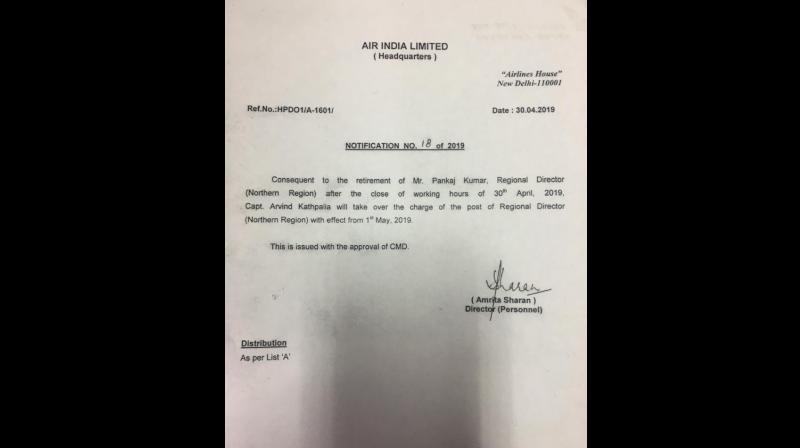 Objecting to Kathpalia’s appointment, ICPA – the union of Air India pilots – alleged that the top officials were “bending backwards to elevate a tainted official”. (Photo: Twitter)

New Delhi: Air India pilot Arvind Kathpalia, whose flying licence was suspended in November 2018 after he failed pre-flight alcohol tests, has been promoted to the position of Regional Director (Northern Region) in the airline, according to an official statement.

In a notification, the national carrier said Kathpalia will take charge from Wednesday.

On November 11 last year, Kathpalia had tested positive for alcohol in two breath analyser (BA) tests before he was to fly Air India's New Delhi-London flight.

On November 13, the Ministry of Civil Aviation issued an order to remove him from the position of Director Operations. However, a week later, Air India posted him as Executive Director.

Objecting to Kathpalia’s appointment, ICPA – the union of Air India pilots – alleged that the top officials were “bending backwards to elevate a tainted official”.

“A person who has broken the law and has charge-sheet pending against him cannot take disciplinary action against other employees. ICPA strongly condemns this and will withdraw support. It's yet again proven, people with strong political connections can get away with any crime,” it added.

Last month, the Delhi High Court had said that Kathpalia’s laxity in taking a breath analyser test would not lead to the assumption that he was under the influence of alcohol.

The court, however, did not agree with the pilot's contention that he was in a hurry to take the flight and due to shortage of time, he could not take the pre-flight breath analyser test.

Kathpalia had earlier submitted before the court that it cannot be presumed that just because he missed the breath analyser test, he was intoxicated.

According to the police, Kathpalia operated a flight from New Delhi to Bengaluru without undergoing the mandatory pre-flight breath analyser test on January 19, 2017.

It was also alleged that there was violation of aircraft rules apart from tampering of evidence, coercive intimidation.