India   All India  30 Apr 2019  Is the next Lok Sabha going to be more gender equitable than the last one?
India, All India

Is the next Lok Sabha going to be more gender equitable than the last one?

Over the years, nevertheless, Indian women turned into enthusiastic voters. 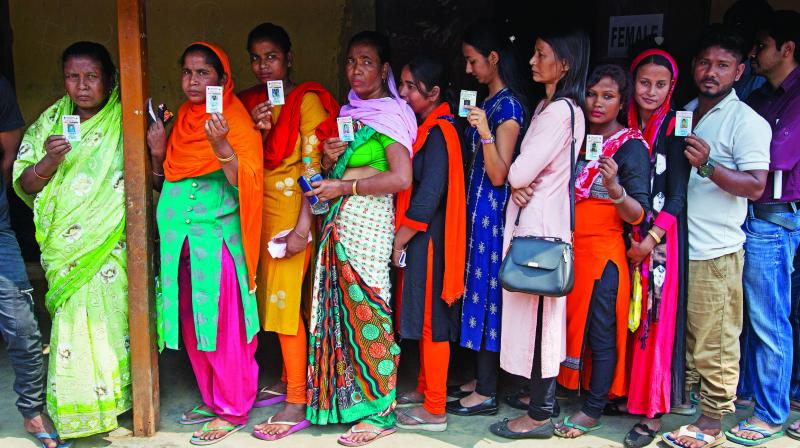 Women show their voter identity cards as they stand in queue to cast their votes in Guwahati earlier this month. (Photo: AP)

The electoral process in the largest democracy is in full throttle. Now, how does the fair sex fare in this run-up to the 17th Lok Sabha?

Let us look back at the 16th Lok Sabha! It was a House which had nine men in every 10 parliamentarians, or in other words, one woman parliamentarian in every 10. In 2014, the number of eligible women voters was 397 million, which was 48.77 per cent of 814 million total eligible voters. But only 62 women MPs — an all time high — could make entry to the 543-member House, which was just 11.58 per cent of its total strength. While men with an electoral strength of 417 million, comprising 51.23 per cent of the total voters, had 481 seats in the 16th Lok Sabha and held 88.58 per cent of the total elected seats in the House. Isn’t that a testimony to a yawning gender gap in the higher echelons of political power?

The electoral fray in 2014 had 670 women, 24 per cent of them from the SC/ST seats. It was barely 8 per cent of the total 8,251 contestants, which was even 20 per cent higher than the number of contestants in the 2009 elections. Poll pundits, however, revealed that there was a marginal increase from three in 1984 to nine in 2014 in the ratio of women candidates per 100 men.

Over the years, nevertheless, Indian women turned into enthusiastic voters. It is not rare to find in the election media coverage of women standing in long queues to cast their votes even in remote rural hinterlands. The increased turnout of women has narrowed down the gender gap from 16.7 per cent in 1962 to 1.79 per cent in 2014. In some states like Puducherry (52.5 per cent), Kerala (51.6 per cent), Goa (51.4 per cent), Manipur (51.4 per cent), Daman & Diu ( 51.4 per cent), Meghalaya (51.3 per cent), Lakshadweep (50.1 per cent) and Tamil Nadu (50 per cent), women even stole a march over men. They, for the first time in 2019, outnumbered men as first-time voters as per the EC’s voter enrolment data.

Well, the growing strength of women voters or their increasing turnout in polls is yet to earn them any political dividends in India’s vote-bank politics, as is found in the cases of “caste”, “region” or “religion”. They continue to remain a political minority, both in seats of power and in party hierarchies, barring a few exceptions. A women’s activist, faculty member and former director of the Sarojini Naidu Centre for Women’s Studies, Jamia Milia Islamia, Bulbul Dhar, says that “in Indian politics women with some family affiliations or star powers only have managed to make a niche for themselves” and added that “even women activists shun electoral politics which they find too murky, being under the control of misogynistic patriarchs”.

Quite predictably, mainline political parties often tend to prefer women either from the “world of glamour” or having “a dynastic background” as a guarantee of success in the electoral fray. A study has found that in 2004, nearly 20.07 per cent of MPs in the 543-member Lok Sabha had a “dynastic” background, which rose to 30.07 per cent in 2009, and then fell to 21.92 per cent in 2014. The “star appeal” of film stars, both men and women, has been found to be fully encashed in India’s personality-centric politics without giving much credence either to their acumen for holding a public office or dedication to take on the responsibilities seriously.

Against such a backdrop, the marginalisation of women in general finds its reflection in the distribution of party tickets. Factors like “winnability” or clout to garner “financial support” or “lack of political experience” weigh against their candidature. A sitting woman MP from a regional party perhaps echoed the sentiments of many Indian political parties, mainline or regional, when she said that, “electoral merit is important for everyone. Every party doesn’t necessarily have women candidates who can win”.

In the current election scenario, only two regional parties out of the total 2,293 political parties have given some weightage to women in candidate nomination. The BJD in Odisha had gone for 33 per cent seats to women for its 21 Lok Sabha seats. A political analyst in Odisha, however, commented that the BJD “adopted a different yardstick for Assembly and Lok Sabha elections when the state is having simultaneous elections”. Political opponents of Naveen Patnaik also dubbed it just a “political gimmick”. However, the BJD manifesto offers several promises for women in the state. While in West Bengal, the AITC chief and the state chief minister nominated 17 women candidates out of its 42 Lok Sabha seats and said that her party had “walked the talk” and “raised the number of women contestants from 35 per cent in 2014 to 41 per cent in 2019”. Although a political analyst from a leading vernacular newspaper from the state commented that “most of them have very little knowledge about the socio-economic realities of
their constituencies… and past experiences had shown that they hardly participate in parliamentary proceedings or skip session after session… and sending such MPs to the House serves no purpose”.

As a renowned political commentator observed that India’s elections are “the noisiest”, and thus in this season of “election noises” women, nevertheless, did find sporadic mentions, be it in party manifestoes or in poll promises, if not the gender issues in their entirety. The promise of passing the long-pending Bill for reservation of 33 per cent seats to women in the Parliament and state Assemblies by party honchos have also been re-heard. Two prominent women politicians from the ruling party who have been denied a ticket while commenting on the prospects of the Bill reportedly said that “barring the two regional parties, all other parties pay lip service to women’s causes”. Bulbul Dhar, faculty, political science, Jamia Milia also says that “there is a manifest outrage against the reservation of 33 per cent seats for women among most of the political parties”.

However, the maiden entry of the National Women’s Party (NWP) and the All India Women’s United Party (AIWUP), has definitely marked a new beginning, even if they might not earn much electoral gain in the 2019 polls. Their alliance is all set for contesting from 283 Lok Sabha seats. The number, a “deliberate choice”, slightly more than 50 per cent of total elected seats in the lower House of Parliament, is meant to send out a strong message “to bring in a women-centric narrative in the country’s politics… and to enable them occupy no less than 50 per cent seats in the Parliament”, Dr Shweta Shetty, the founder of the NWP, asserted.

Now, in the current scenario, when the number of women contestants on an average remains below 10 per cent, the prospect of having a more gender equitable 17th Lok Sabha looks bleak.

The writer is a former director-general of Doordarshan and All India Radio, and a former press secretary to the President of India