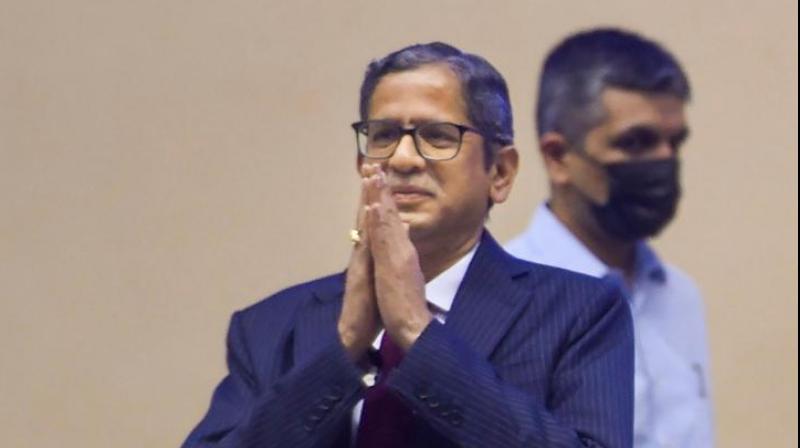 New Delhi: Referring to the “lakshman rekha” that separates the three organs of the state - executive, legislature and judiciary – the Chief Justice of India, Justice N.V. Ramana on Saturday said that the higher judiciary would never come in the way of governance if it is in accordance with law. On his part, while addressing the inaugural session of the joint conference of chief ministers and chief justices of high courts, Prime Minister Narendra Modi made a strong pitch for the use of local languages in the higher judiciary.

The PM emphasised that the use of local language will increase the confidence of common citizens in the justice delivery system and they will feel connected with it. He said that the justice system should be connected with the people and in the language understood by them and unless this happens, people will not be able to distinguish between executive fiat and a judicial pronouncement.

The Prime Minister said as India celebrates the 75th anniversary of independence, focus should be on the creation of a judicial system which measures up to the expectation of the people, where justice is easily available, is quick and for everyone, when we celebrate 100 years of independence in 2047.

The Prime Minister also spoke about nearly 3.5 lakh under trial prisoners, mostly coming from disadvantaged sections or with average family backgrounds, languishing in jails. The PM urged the chief ministers and high court judges to look into these cases.

Speaking at the joint conference, Justice Ramana said the three organs of the state “must be mindful of the Lakshman Rekha” of their respective domains. He asserted that often litigation is triggered because of two major reasons – one, non-performance by the various wings of the executive and second, the legislature not realizing its full potential. These are avoidable burdens on the judicial system.

CJI blamed the non-performance by the various wings of the executive including non-implementation, defiance of the court orders and the legislature not passing laws with clarity of thought and foresight, for the ever increasing number of cases getting added to the already overburdened judiciary.

Taking a dig at the different wings of the executive for disregarding the court orders, CJI said, “The decisions of courts are not implemented by the governments for years together. The resultant contempt petitions are a new category of burden on the courts, which is a direct result of the defiance of the governments. Deliberate inactions by the Governments, despite judicial pronouncements, are not good for the health of democracy.”

CJI also called out the legislature for enacting ambiguous laws without required deliberation, clarity of thought and foresight. “At times, ambiguities in legislation also add to existing legal issues. If the legislature passes a law, with clarity of thought, foresight and with people’s welfare in mind, the scope for litigation gets minimized. The legislature is expected to solicit the views of
the public and debate the bills, clause by clause, threadbare before enacting a law,” he said in his address at the 11th joint conference at Vigyan Bhawan.

Referring to the concern expressed by him on August 15 last year about the passing of laws without much legislative scrutiny, CJI said that he was misunderstood by some quarters. He referred to Lok Sabha Speaker Om Birla saying, “Laws should be made after thorough debates and discussions, incorporating the needs of the aspirational sections of the society.”

Noting that the governments are the biggest litigants accounting for nearly 50 per cent of the cases CJI said, “It is beyond my understanding as to why intra and inter departmental disputes of the government or fights between public sector undertakings and the government end up in courts.”

CJI said abiding by law and the constitution is the key to good governance. However, this is often ignored and opinions of legal departments are not sought in the rush to implement executive decisions.

Lamenting that the well-intended public interest litigation (PIL) was being misused for personal interest litigations and has become a tool to stall projects or pressurise public authorities, settle political scores or corporate rivalry. CJI said that realising the potential for misuse, the courts are now highly cautious in entertaining PILs.

Later in the evening in a joint press conference with the Union law minister Kiran Rijiju on the day long deliberations, Justice Ramana on security of judges in subordinate judiciary said, “The chief ministers have assured that they will provide adequate security. We are planning to implement the two-layer security system as followed in Jammu and Kashmir High Court to combat such instances.”

Fielding a question on the governments – both at the centre and in the states - being the biggest litigants, Mr Rijiju said that they will formulate a “robust litigation policy.”