Key parameters that determine the onset of the Southwest Monsoon in Kerala have not been met, IMD chief says refuting Skymet 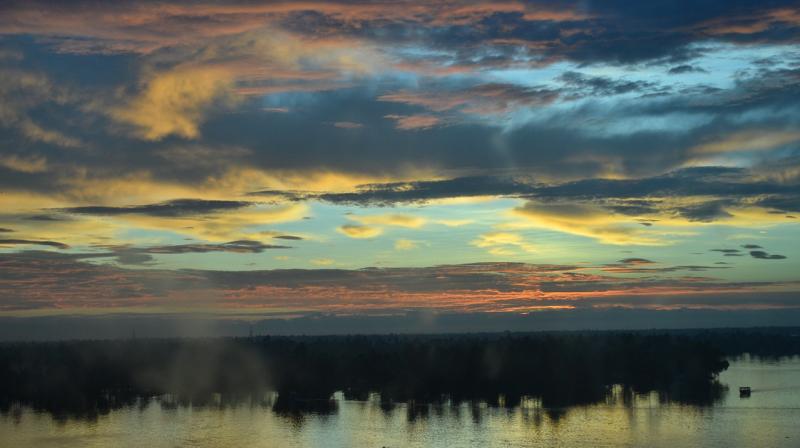 The Southwest Monsoon is nearly on Kerala's shores but not quite there yet, the India Meteorological Centre, which predicts its arrival on June 1, says.

Private weather forecaster Skymet has declared that the Southwest Monsoon has arrived in Kerala today. But its claim has been disputed by the country’s official broadcaster India Meteorological Department, which says the monsoon will set in only on June 1.

The private forecaster’s declaration of the arrival of the monsoon is in line with its prediction that the annual rainfall season would begin on May 28, give or take two days.

Hold on, IMD director general Mrutunjay Mohapatra says, there are key parameters that must be met before such a declaration can be made.

First, the onset over Kerala is declared on the second day after two days of consecutive rainfall of at least 2.5 mm is recorded after May 10 in 60 per cent of the 14 weather stations -- Minicoy, Amini, Thiruvananthapuram, Punalur, Kollam, Allapuzha, Kottayam, Kochi, Thrissur, Kozhikode, Thalassery, Kannur, Kudulu and Mangalore.

That has not happened. Kerala has been receiving intermittent rainfall over the past few weeks but it has not fulfilled this key parameter.

The second, Mohapatra says, is that the depth of westerlies should be maintained up to 600 hectopascals (hPa) and the third is the Outwave Longwave Radiation should be below 200 watt per square metre (wm-2). That bit of jargon there may fly over your head, but suffice to say that the IMD chief says those two parameters have not been fulfilled.

The IMD also receives additional data from India’s wide range of weather satellites, and collaborates not only with ISRO but with other specialised government agencies such as Indian Institute of Tropical Meteorology, National Centre for Medium Range Weather Forecasting and the National Institute of Ocean Technology. Besides it also monitors seismic activity. Its annual budget is Rs 3.52 billion rupees, according to 2011 data.

So, if one were to disregard the IMD and take the upstart Skymet at its word, what could be the clinching factor? Perhaps if it had a track record of beating the IMD at predicting the monsoon. But does it?

According to data comparing the predictions of the IMD, Skymet and actual rainfall from 2012 to 2018 published in a Business Standard article of April 2019, Skymet has been near accurate only two times. In 2012 when it predicted below normal monsoon at 94 per cent whereas the IMD had said it would be near normal at 99 per cent, the actual rainfall received was 92 per cent.

This figure is calculated based on the long-period average of rainfall for the four-month period from June to September.

Another report in April last year, published in Money Control, also said pointed out with data that Skymet had been accurate only one in five times between the years 2014-15 and 2018-19.

However, Skymet founder, former television journalist Jatin Singh, however claims in a Forbes article that year that his forecasters beat the 144-year-old IMD right six times out right, since it began forecasting the monsoon in 2012.

Yet why is Skymet’s prediction being taken seriously? Here is some background.

Singh claims he began with just Rs 1 lakh in 2002 and pitched the services of Skymet to his former employer, the TV news channel Sahara Samay. He had begun by hiring meteorological experts from the Indian Air Force and began generating forecasts from the free weather data that the US government’s National Oceanic and Atmospheric Administration published.

Surprisingly, Sahara Samay was willing to pay Rs 18 lakh a year to the new kid on the block, the Forbes report said. Soon Skymet was also in business with The Hindu and The Hindustan Times, and within two years was making Rs 2 crore annually.

Skymet then forayed into allied services such as forecasting for agriculture, partnering with Nokia to provide weather data to farmers for a fee, and began being noticed by agro-giants Monsanto and Bayer, apart from Thomson Reuters and Rallis India, all of whom became its clients.

Since 2011, Skymet has received funding of undisclosed amounts from the Godrej group and other funders which helped it expand its operations to more than 6,500 weather monitoring stations.

In 2018, Skymet posted total revenues of ₹40 crore, and what’s most interesting about it is that with its highest revenues from providing live data to crop insurance companies. What’s more, the Forbes report says even the government used Skymet data on crop yields is used by the government to introduce insurance schemes and settle farmers’ claims.

Crop insurance in India, especially the government scheme Pradhan Mantri Fasal Bima Yojana (PMFBY), is a subject of much dissatisfaction among farmers. The scheme which was started in 2016-2017 has delayed claim settlements to farmers year after year. Besides, there were problems with the scheme initially covering low-risk areas and insurance companies making a good buck from premiums where they did not have to make any payouts.