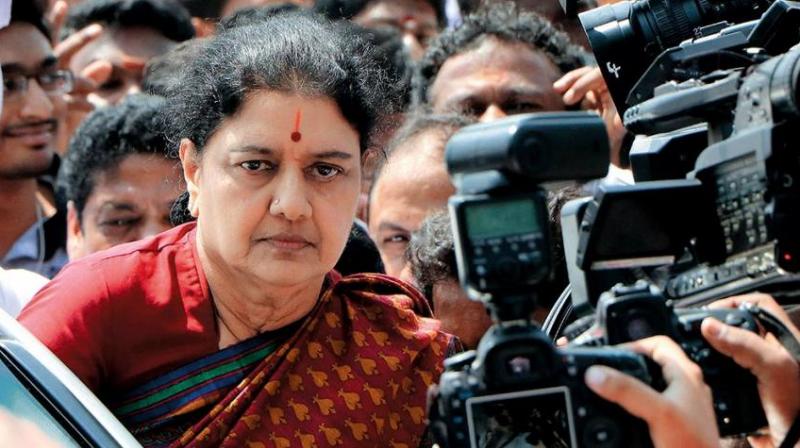 Sasikala had been staying in Chennai's T Nagar area after returning to the city in February. (Photo: File/PTI)

Chennai: Expelled AIADMK leader VK Sasikala has dropped enough hints of returning to active politics after the COVID-19 pandemic gets over. In an audio clip of an phone conversation between Sasikala and one of the party cadres, which has gone viral on social media, the leader is heard confirming her plans of her return in the politics.

This follows after AIADMK lost the power in Tamil Nadu elections to DMK.

The phone call has been verified by Janarthanan, the personal assistant for AMMK General Secretary TTV Dinakaran.

"Do not worry, surely will sort out the party things. All be brave ok. Once corona pandemic ends, I will come," Sasikala is heard telling the cadre during the phone call.

"We will be behind you Amma," the cadre is heard replying to her.
Earlier in March, the Expelled AIADMK leader has announced her retirement from politics and issued a statement saying that she will 'set herself apart from politics'.

The former aide of Jayalalithaa, then in her statement said "I set myself apart from politics and pray for the golden rule of my Goddess Akka (Jayalalithaa). I will continue to pray for her vision always."

Sasikala had been staying in Chennai's T Nagar area after returning to the city in February following the completion of her four-year prison sentence in a disproportionate assets case.

The former AIADMK leader was discharged on January 31 from Bengaluru's Victoria hospital where she was undergoing COVID-19 treatment. She was officially released from judicial custody on January 27 after completing her four-year prison sentence in a disproportionate assets case.

In 2019, the Income Tax Department had attached properties worth Rs 1,600 crores belonging to her under the provisions of the Benami Transactions (Prohibition) Act.

After the demise of Jayalalithaa in December 2016, Sasikala was elected General Secretary of the AIADMK. She had handed over the control of the party to nephew Dhinkaran after being convicted in the disproportionate assets case in February 2017.

Edappadi Palaniswami was made Chief Minister with her backing but Sasikala was removed after a rival faction led by O Panneerselvam, who had rebelled against Sasikala merged with the Palaniswami faction. Both Sasikala and Dhinakaran were removed in September 2017.