India   All India  30 May 2022  Pakistan drone with magnetic bombs shot down in Kathua
India, All India

Pakistan drone with magnetic bombs shot down in Kathua 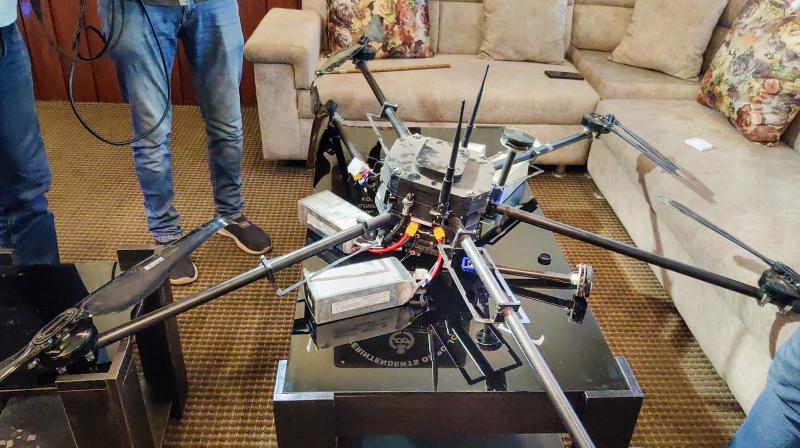 A Pakistani drone that was shot down by police near the international border, in Kathua district, Sunday, May 29, 2022. The drone was carrying seven magnetic bombs and seven grenades, according to police. (PTI)

Srinagar: A North Korean-made unmanned aerial vehicle (UAV), popularly known as a drone, sent from Pakistan with a payload of seven magnetic or sticky bombs and an equal number of Under Barrel Launcher Grenades (UBLGs), was shot down by the Jammu and Kashmir police in frontier Kathua district on Sunday, officials said.

According to the officials, the drone with the payload of sticky bombs and UBL grenades tied to it was shot down by a patrolling party of the police in the Talli Hariya Chak area close to the International Border (IB) with Pakistan in Kathua. This is the third Pakistani drone with a payload of arms and ammunition to be shot down by the forces in the Jammu sector since June 2020.

Mukesh Singh, the additional director general of police (Jammu region), stated that the drone was targeted by alert policemen the moment it crossed into the Indian side of the IB. "A police patrolling party picked up the movement of the drone at the border in the Talli Hariya Chak area in the morning and fired at it.

The drone was brought down after being hit by ground fire," he said. He added that a bomb disposal squad was quickly called to inspect the drone’s payload and that seven magnetic bombs and an equal number of grenades (compatible with UBGL) were found attached to it.

The ADGP also said that police search parties are being regularly sent to the area because of the frequent drone activity from across the border.

The J&K police and various security forces combating the decades-long insurgency in J&K had recently said that they are devising new anti-terrorism strategies in the face of emerging challenges, especially after the discovery that the terrorists now have access to small sticky bombs.

After presiding over a meeting of the officers to review the security for the yatra, Mr Kumar had said the possibility of "anti-national elements" using sticky bombs and drones to disrupt the pilgrimage remained the focal point of the discussion.

After being cancelled for two consecutive years due to the COVID-19 pandemic, the annual yatra to the 3,888-metre-high cave-shrine in the Kashmir Himalayas and spread over 43 days, will begin from both the traditional Pahalgam (Anantnag) and shorter Baltal (Srinagar district) routes on June 30, coinciding with Ashaad Chaturthi, an auspicious day in the Hindu calendar and conclude on Shravan Purnima (Raksha Bandhan) on August 11.

However, another senior police official said that sticky bombs are, of course, a problem but the situation is not alarming. "We will deal with it effectively and ensure a peaceful Amarnath pilgrimage," he said, adding that there will be round-the-clock patrolling of the yatra routes by the security forces besides surveillance through 360-degree camera fitted Mobile Bunker Vehicles (MBVs).

Meanwhile, a gunfight between separatist militants and security forces broke out in Gundipora village in the southern Pulwama district on Sunday evening.

The J&K police, in a tweet, quoting Mr Kumar, said, "Two local terrorists of the Jaish-e-Muhammad outfit trapped in the encounter include the killer of our martyred Constable Reyaz Ahmad. JeM terrorist Abid Shah killed our unarmed colleague on May 13, 2022."

Earlier during the day, a separate group of militants fled the Sandran Nallah area of the Qazigund belt in neighbouring Kulgam district, leaving behind a pistol and two grenades after the security forces launched a cordon-and-search operation, the police sources said.

Tags: drone from pakistan was shot down