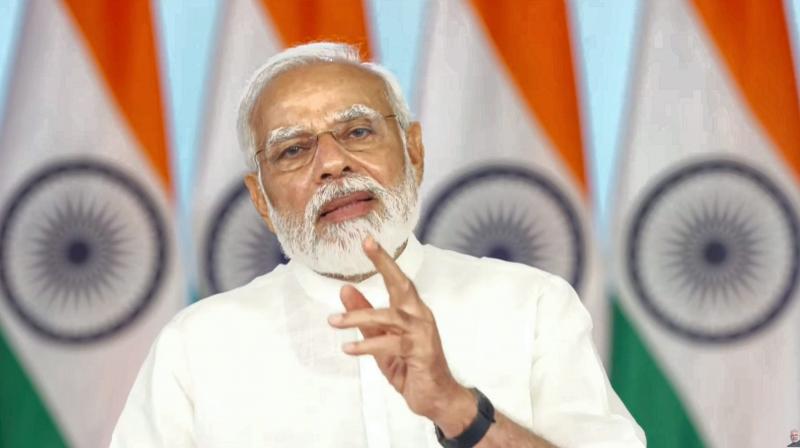 Prime Minister Narendra Modi speaks during a video conference as he releases benefits under the PM CARES for Children Scheme. (PTI Photo)

New Delhi: Asserting that the BJP-led NDA government’s eight years in office were dedicated to the welfare of the poor, Prime Minister Narendra Modi said on Monday: “India’s pride has increased around the world and our power in global forums has increased.” The PM also expressed happiness that as his government is completing its eight years, the “confidence of the country and the self-confidence of its people is unprecedented”.

Speaking at the PM Cares for Children event, Mr Modi also said India was getting out of the “vicious cycle” of corruption, scams, nepotism, and with terrorist organisations spreading across the country and regional discrimination, in which it was trapped before 2014, and asserted that his government’s eight years were dedicated to the welfare of the poor. The ruling BJP claimed Mr Modi had “changed the political culture” of the country and “ushered in a responsive and pro-active government”.

Talking about the global Covid-19 pandemic, Mr Modi said India trusted its scientists, doctors and youth during that period so that Covid-19 did not become a problem, and India was instead “a solution-giver for the world”. He said coming out of the negative impact of Covid-19, India has become one of the “fastest growing economies in the world”. He also said the PM Cares fund helped a lot in preparing hospitals, buying ventilators and setting up oxygen plants during that period.
As the Narendra Modi government has completed eight years in power, Union home minister Amit Shah said Mr Modi had “given wings to the dreams and aspirations of every citizen of the country and instilled in them new confidence during his eight years of government”. The first Modi government assumed office on May 26, 2014, while Mr Modi was sworn in for a second term as PM on May 30, 2019.

In a series of tweets in Hindi on the occasion, Mr Shah said in the form of Mr Modi, India had got leadership in which every section has faith and pride. “Considering power as a medium of service, PM @narendramodi gave rights to the poor, farmers, women and the underprivileged, which instilled their faith in democracy and made them a participant in the development journey of the country. Congratulations to all citizens for these eight years full of historical achievements. Today, in the form of Modi, India has leadership on which every section has faith and pride and meeting the expectations of the public with tireless hard work is a strong pillar of this belief,” the home minister said. This “power of the faith of 130 crore Indians was taking the country forward in every field,” Mr Shah tweeted, with the hashtag “#8YearsOfSeva”.

Saying that Mr Modi has “changed the political culture and ushered in a responsive and pro-active government”, BJP president J.P. Nadda said that “seva, sushasan and garib kalyan” (service, good governance and welfare of poor) were the soul of the Modi government.

Addressing a press conference at the BJP headquarters, Mr Nadda also released a theme song to mark the Modi government’s anniversary that described it as the creator of modern India. Union ministers Smriti Irani, Dharmendra Pradhan and Anurag Thakur were present on the occasion.

Mr Nadda also launched a special campaign, called “8 Years of Seva, Sushasan & Garib Kalyan”, to reach out to the youth and citizens through the NaMo app. The BJP president also listed various achievements of the Modi government, including Ayushman Bharat, PM-Kisan, Garib Kalyan Anna Yojana, and the “historic decisions” taken for the development of the Northeast region, the Ram Mandir, the Kashi Vishwanath Corridor and the redevelopment of Kedarnath, among others.