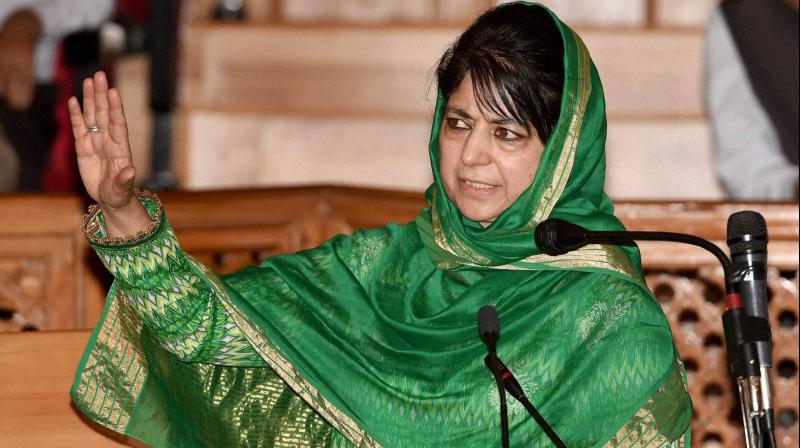 Mehbooba Mufti said her father made the BJP understand that the Article 370 is a bridge between Kashmir and the rest of the country and if it was revoked, 'you will be finished'. (Photo: File | AP)

Jammu: Former J&K Chief Minister Mehbooba Mufti on Monday strongly rejected the allegations of discrimination against Jammu and Ladakh regions during her rule, asserting that she never considered Jammu and Kashmir "different entities" and evenly distributed the funds among them.

The PDP president said her two-year tenure in power was the most difficult period of her life, which she braved to fulfill the visions of her father Mufti Mohammad Sayeed and pull Jammu and Kashmir out of a state of anarchy.

“We did not make the alliance with the BJP for the chair. Mufti had a vision and wanted cooperation from the BJP under the leadership of Prime Minister Narendra Modi similar to what he had experienced when A B Vajpayee was in power, but unfortunately, it did not happen,” Mehbooba said, addressing her party workers' rally, the first one after the fall of her government in June.

The BJP had pulled out from the PDP-led government on June 19, claiming that they took the decision due to the discrimination against the Jammu and Ladakh regions.

The rally, which was organised by the PDP to mark the 19th foundation day of the party, witnessed tense moments when Mehbooba, apparently feeling uncomfortable, stopped her 20-minute speech midway and sat back on her chair. She, however, resumed her address shortly from the chair itself, explaining that she "felt uncomfortable" due to the hot and humid weather conditions.

“Sayeed was in power for 10 months and I remained in power for two years and two months. We faced a lot of difficulty…”

The agenda of the alliance, she said, "included talks with Pakistan and Kashmiris, besides the returns of power projects (to the state) and maintaining status quo on the Article 370 which gives special status to Jammu and Kashmir.”

The PDP leader said she did whatever was possible for her but made no compromise.

“I never considered Jammu and Kashmir as different entities and distributed funds, colleges and jobs in police and other government departments equally without any corruption. I made no compromise,” she said.

She added her father made the BJP understand that the Article 370 is a bridge between Kashmir and the rest of the country and if it was revoked, “you will be finished”.

Without naming anyone but apparently referring to senior BJP leader and former Minister Lal Singh's allegations that she "deliberately handled Kathua rape and murder case to create a division between Hindus and Muslims in Jammu", she said that the rapists have no religion and those talking about the Dogra pride came in support of the ones who raped and killed a minor girl.

“It is nothing to do with the Dogras. A Dogra ruler forbids a maharaja (king) from visiting Jammu and Kashmir after he came to know that he had passed livid remarks against a local girl. This is the pride of the Dogras,” she said.

She said the PDP suffered a lot over the past three years for a “bigger cause” to pull the state out of the prevailing crisis and end the bloodshed there.

“I assure you that we will not rest till we achieve our goal,” she said.

Defending her government's directive not to harass the Gujjars, she said after the BJP objected to the implementation of the Forest Act in the state, a committee was constituted to sort out the issue.

She said she ordered the tribal affairs department not to harass the Gujjars unless the Forest Act was enforced.

The former chief minister said "she faced a lot of pulls and pressures" over the past three years but "remained steadfast and put up with the alliance for a bigger goal of pulling the state out of the cycle of death and destruction."

Terming the previous rule by her father from 2002 to 2005 as a “golden era”, she said it was because of the support extended by erstwhile Prime Minister A B Vajpayee that resulted into dialogue with Pakistan and Hurriyat conference, and the opening of the cross-border roads, besides massive developments.

Acknowledging the anger in Kashmir against her party over its alliance with the BJP, she said the BJP had got the mandate in Jammu while the PDP had secured it in Kashmir.

“We had a lot of discussion with Sayeed who said there was no other option, given the mandate to Modi and the past experience when Vajpayee was in power. His only aim was to pull the state out of the anarchy,” she said, adding that the PDP had expected the support like it got during the Vajpayee's era but “unfortunately it did not work that way”.

“Aligning with the BJP was a difficult decision… the hatred among the Kashmiris against us on this decision was nothing short of taking poison,” the PDP president said.

She said the progress made by the PDP over the last 19 years has no parallel in the country.

Praising Vajpayee, she said that unlike the present regime which wanted Pakistan to first stop supporting terrorism in Jammu and Kashmir to start a dialogue, the BJP stalwart visited Lahore and made the erstwhile Pakistan president to promise him that they would stop supporting militancy and the result was visible on the ground as well.

“When Mufti left the chair and Vajpayee too lost the power, the next government was formed and the peace initiative received a set back with everything coming to a standstill,” she said.