India   All India  30 Jul 2018  Hope and despair as DMK workers pray for Karunanidhi outside hospital
India, All India

Hope and despair as DMK workers pray for Karunanidhi outside hospital

Proclaiming Karunanidhi as a 'medical miracle', DMK workers wish that he come back home soon. 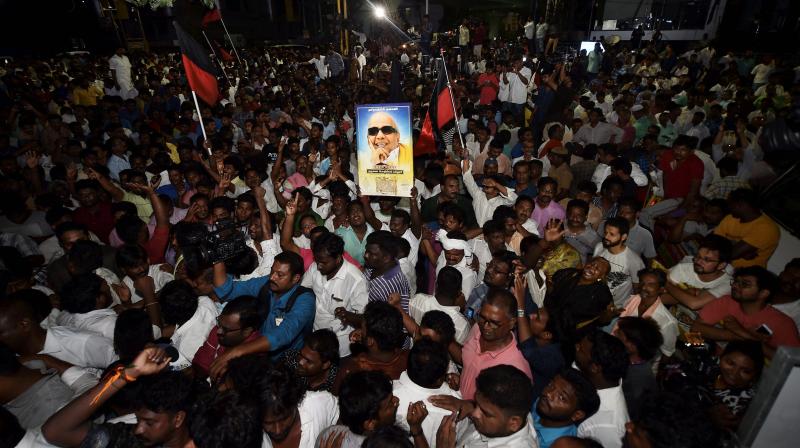 DMK supporters gather outside the hospital where M Karunanidhi is being treated, in Chennai. (Photo: PTI)

Chennai: They scream one moment, tears rolling down their cheeks, then burst into frenzied sloganeering, hailing the fighting spirit of their Thalaivar (leader), who wages a grim battle for life at a hospital in Chennai.

Emotions oscillate between hope and despair as hundreds of DMK supporters outside the Kauvery Hospital pray for the life of party chief M Karunanidhi, who is admitted to the intensive care unit since early Saturday.

A group of DMK workers and supporters has formed a circle at the entrance of the hospital, holding a white banner proclaiming the 94-year-old leader as a "medical miracle" and wishing that he come back home soon.

"They (the hospital) said it was a set back, but he defied all odds and improved...for his age it is a medical miracle....he will continue to repeat the miracle and get better," says Balu from Tiruchirappalli district, proudly pointing to the framed photograph of Karunanidhi and M K Stalin, his son and heir apparent, that he wears in a necklace. Wearing a black-red turban, the colour of the party flag, the DMK worker from the Cauvery delta district stood in the middle of the circle, chanting slogans hailing his leader.

Some in the group break down, but all hope he would be back home soon.

Some party supporters were seen beating their chests, while a few got their heads shaved to seek divine intervention so their leader gets well soon.

A glum-faced Chellamma, 84, who has come from Ambasamudram in distant Tirunelveli, sits quietly on the pavement outside the hospital. She has come here to pray for her leader.

"It is despairing to see Thalaivar is not as robust as before," she says.

The Eldams Road junction, where the hospital is located, has turned into a mega makeshift camp for party supporters and workers from different walks of life.

Among them are people like Baskaran, a long-time vendor of party souvenirs like photographs of Karunanidhi and Stalin, and Thillainayagam, a Tamil teacher from Nagapattinam. While some sit quietly or sleep on the pavement waiting for the good news, some senior citizens could be seen talking animatedly about their leader's attributes and his achievements.

As young DMK supporters hold banners and placards with images of Karunanidhi, often bursting into feverish sloganeering, motorists on the flyover abutting the road stop to have a glimpse of the scenes unfolding in front of the hospital.

DMK workers in party uniform--red shirt and black trousers--are seen assisting the police in regulating the milling crowd. But despite their efforts to keep things under control, some patients and attendants complained about the difficulty in reaching the facility because of the multitude.