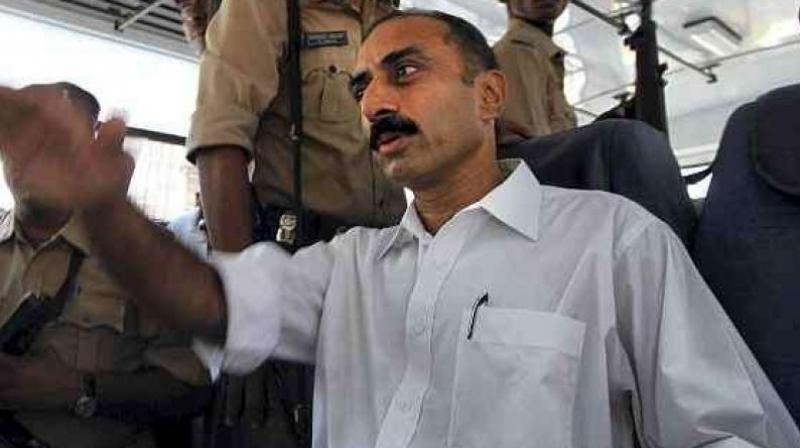 The Gujarat Cadre IPS officer Sanjiv Bhatt was suspended in 2011 for remaining absent from duty without permission and misuse of official vehicles and later sacked in August 2015. (Photo: File | PTI)

New Delhi: The Supreme Court on Monday allowed the demolition of illegal structures at the residential property jointly owned by controversial sacked IPS officer Sanjiv Bhatt and his wife in Ahmedabad.

A bench of justices Ranjan Gogoi, R Banumathi and Navin Sinha said that there is no ground to interfere with the high court verdict.

"We are not inclined to interfere with the impugned judgment. The Special Leave Petitions are accordingly dismissed," the bench said.

Senior advocate Harin P Rawal, appearing for Shweta Sanjiv Bhatt, said that the municipal corporation has not given ample opportunity to the petitioner to hear their case and had taken an arbitrary decision.

"Earlier, you came to us, we had then protected you. We have now examined the matter. We can't interfere. Sorry", the bench said. He said that even the high court erred in its finding and "it is a jointly owned property with my husband, who was a police officer".

"Your husband was a policeman. It does not mean you will take law in your hand. Sorry, we can't interfere with the order of high court," the bench said.

The Gujarat Cadre IPS officer Sanjiv Bhatt was suspended in 2011 for remaining absent from duty without permission and misuse of official vehicles and later sacked in August 2015.

On July 25, immediately after the high court ordered demolition of illegal structures at Bhatt's residence, the former cop's wife moved the apex court and had managed to secure the stay of demolition drive.

Shweta Bhatt had claimed before the apex court that just after the pronouncement of the verdict by high court at 11 am, the municipal corporation team had reached outside her house to demolish it.

The apex court, in its order, while staying the demolition exercise till Monday, had allowed Shweta Bhatt to file the appeal against the order of the high court.

"It is in the circumstances that we entertain this oral mentioning and direct that till Monday i.e. July 30, 2018, there shall be no demolition pursuant to the order of the High Court dated July 25, 2018, passed in Letters Patent Appeal," the bench had said. A division bench of the high court had upheld a single judge order directing the Ahmedabad Municipal Corporation to demolish the illegal construction at former IPS officer's house and had asked the civic body to comply with its order without any delay.

A petition was filed in 2012 by one of the Bhatt's neighbours alleging illegal construction at the residential property based on information gathered through RTI applications.