There was high drama outside the hospital with the police having to resort to mild force in a lathicharge to disperse the swelling crowd. 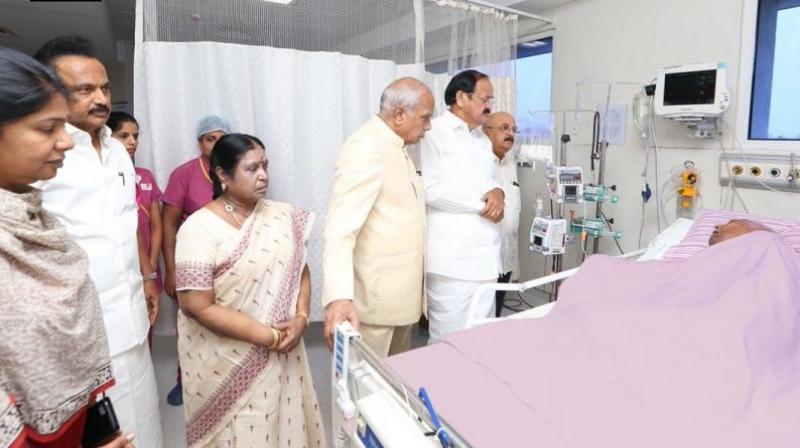 Chennai: DMK president M. Karunanidhi suffered a serious setback to his health condition late on Sunday night despite showing significant improvement due to medical intervention through the day at Kauvery Hospital’s ICU. Under treatment for fever due to urinary tract infection, he was brought to the hospital from his Gopalapuram residence in the early hours of Saturday when his pulse dropped.

The DMK earlier on Sunday released a photograph showing vice-president M. Venkaiah Naidu standing beside the 94-year-old Dravidian patriarch in his hospital bed. With TV channels flashing images of the picture and commentators noting that the leader was doing well even without any support systems such as the ventilator, the huge crowd of party cadres and fans filling up the Alwarpet junction outside the hospital burst into cheers.

There was high drama outside the hospital with the police having to resort to mild force in a lathicharge to disperse the swelling crowd. Dr Aravindan Selvaraj, executive director of Kauvery Hospital, issued a bulletin at 9.50 pm saying there was a “transient setback in the critical condition” of Mr Karunanidhi. “With active medical support, his vital signs are normalising. He continues to be closely monitored and treated by the panel of expert doctors”, said the brief statement. Vice-president Naidu had earlier tweeted that doctors at Kauvery told him that Mr Karunanidhi’s condition was stable. “Visited Kaveri Hospital and met former Chief Minister Thiru Kalaignar Karunanidhi. Met his family members and doctors and enquired about his health. Doctors said he is stable. Wish him a speedy recovery,” Mr Naidu tweeted.

However, unconfirmed reports trickling from hospital sources insisted that the DMK chief’s health condition was fast deteriorating and his pulse had once again dropped. Police reinforcements were rushed and after repeated appeals from former Union minister A. Raja asking the cadres to go home as Kalaignar was on the recovery path, failed to get any response from the crowds that only grew, the police resorted to mild lathicharge to disperse the people and clear the roads.

At about 10.50 pm, Mr Karunanidhi’s son M.K. Stalin, the party’s working president, left the hospital in what might have been an attempt to convey to the cadres that his father was stable and they too could go home.