When contacted, community head Chandulal Chandeliya refuted allegations and said he was away from the city. 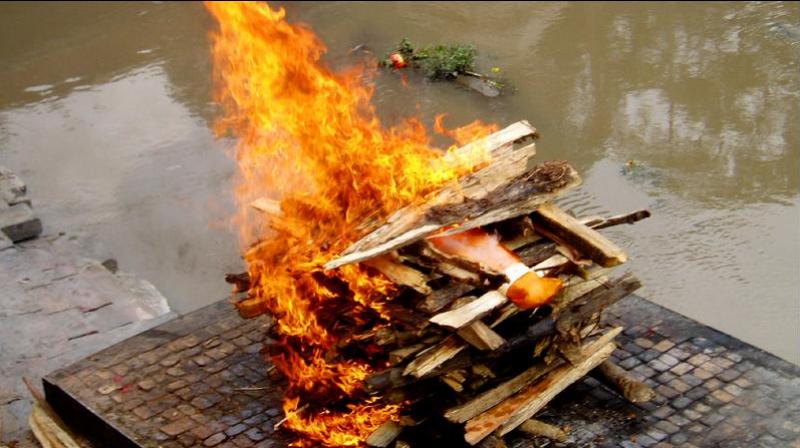 'The family was subjected to the community wrath as we four sisters decided to shoulder our father's bier as per his last wish,' said Meena. (Representational Image)

Kota: A khap panchayat of Rager community in Bundi district near Kota on Sunday allegedly outcast the four women and their family members for performing the last rites of their father, who had no son to shoulder his bier.

"The family was subjected to the community wrath as we four sisters decided to shoulder our father's bier as per his last wish," said Meena, the eldest of the four daughters of Durgashankar Tailor, 58, who died Saturday night at his residence in Barli Bundi Rager colony in Bundi.

Though some community leaders denied the incident, the victim family members insisted that they have been ostracised "not openly but in a silent way" as they were not allowed to have the customary, post-cremation bath at the community complex.

"They did not supply us any food either after we returned home from the crematorium ground," said Meena, explaining the custom as per which no meal is cooked in the house of a deceased on the day of the death and the family is supplied food by the neighbours.

The incident comes close on the heels of another case of ostracisation of a five-year-old girl in Bundi district for accidentally damaging some eggs of a sandpiper bird.

Meena said following her father's death after a prolonged illness, she and her three sisters decided to perform his last rites as per his last wishes and shoulder his bier to the cremation ground, as "we have no brother." But the community leaders objected to it, threatening with ostracisation of the family and non-participation of community members in the funeral, said Meena.

But as we did perform the last rites of our father, they declared us outcast, she added. "The community leaders first asked us not to shoulder the bier and not to perform the last rites but when we stuck to our decision, they asked us to lay prostrate before them along with our wailing mother and seek forgiveness from them," said Meena.

"As we did not tender an apology, we were not allowed to have a bath in the community complex after we returned from the cremation ground. The complex was locked and all the men and the women in the family had to take bath at home," she said.

"It was our father's last wish that his four daughters should shoulder his bier and perform the last rites as we have no brother and we just fulfilled our father's wishes. We have committed no crime," said Meena's younger sister Kalawati, a BA final year student.

"We later even tendered an apology to the community leaders, but they stood adamant. Only a few of the educated community members participated in the funeral," said Tikam Chand, the maternal uncle of the four women.

When contacted, the community head Chandulal Chandeliya refuted the allegations that the family members have been outcast and said he was away from the city. He went on to praise the four women's act of shouldering their father's bier, and alleged that "some community people from outside Bundi having a rivalry with us are behind spreading the rumour of outcasting the family."

Bundi Municipality's former Chairman Modu Lal, one among the community leaders also refuted the allegation of ostracisation of the family, saying no such diktat was ever delivered.

On not unlocking the community complex for Durgashankar's family members to have a bath, Modu Lal said they did not ask for the keys.

"The Khap panchayat does not deliver its diktat in writing but their diktat can be justified just by a visit at the family's house," said a senior community member on condition of anonymity.