Maratha community, constituting around 30 pc of state's population, has been agitating to demand reservation in jobs, education. 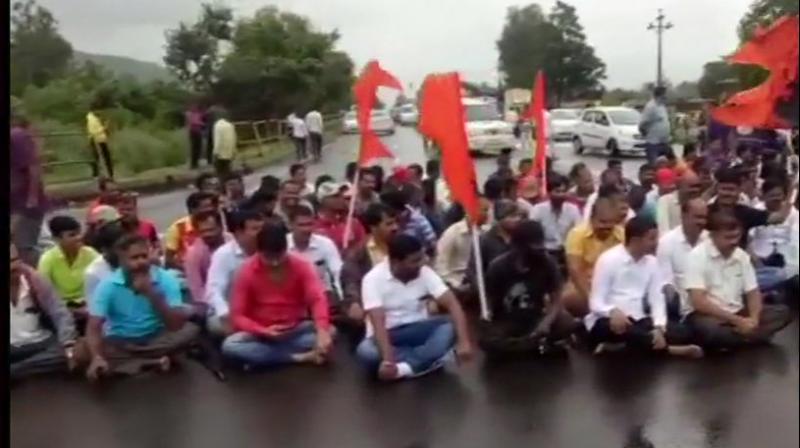 In Chakan, an industrial hub 40 kms from the Pune city, protesters indulged in stone-pelting and torched some public transport buses and private vehicles. (Photo: Twitter | ANI)

Aurangabad/Pune: The agitation by Marathas for quota saw one more man committing suicide and protesters resorting to violence and arson at separate places in Maharashtra.

After violence in Chakan area of Pune on Monday, orders prohibiting assembly of more than four persons at a place were imposed to restore law and order, Pune district collector Naval Kishor Ram said.

Some Maratha organisations had given a call for a bandh on Monday in Chakan area and a rally was carried out.

The politically-influential community, constituting around 30 per cent of the state's population, has been agitating to press their demand for reservation in jobs and education.

Amid the continuing agitation, the Opposition Congress approached Maharashtra Governor Ch Vidyasagar Rao, urging him to direct the Devendra Fadnavis government to announce a decision on the reservation issue immediately.

In Chakan, an industrial hub 40 kms from the Pune city, protesters indulged in stone-pelting and torched some public transport buses and private vehicles, a senior police officer said.

Some police personnel sustained injuries in the stone pelting by the agitators, he said.

In the wake of the violence, prohibitory orders under Section 144 of CrPC were clamped in Chakan to restore law and order, Ram said.

Quick Response Teams have been moved to the violence affected area, police said.

Meanwhile, a 35-year-old man allegedly committed suicide by jumping in front of a moving train in Aurangabad in central Maharashtra over the Maratha quota demand, police said.

The man, Pramod Jaising Hore, had posted a message on his Facebook page and shared a message on WhatsApp on Sunday, saying he would be ending his life in support of the quota demand, Mukundwadi police station's Senior Inspector Natha Jadhav told news agency PTI.

He became to fourth person to lose life during the agitation over the last one week.

In his message on Facebook, Hore wrote in Marathi, "Chala aaj ek Maratha jaatoy, pan kahi tari Maratha arakshanasathi kara, jai jijau-aapla Pramod Patil (today one Maratha is leaving... but do something for the Maratha reservation... )," a police official said.

The man, who was preparing for the Maharashtra Public Service Commission exams, later posted another message, saying "Maratha reservation will claim one life", he said.

Many of Hore's friends had requested him not to take the extreme step but he did not pay heed.

His body was found on the railway tracks this morning, the official said.

On learning about his suicide, a large number of people gathered outside his house.

His family members said they will not take possession of the body till the state government takes a final decision on the issue of reservation, over which the Maratha community has been agitating.

The man used to run a shop in Mukundwadi and his wife was working as 'gram sevika' (a village-level functionary), Jadhav said.

Pro-reservation activists staged a 'rasta roko' (road blockade) on the Jalna Road today to press for their demands.

Prior to this, two men had committed suicide in demand for the quota last week while another died during violence by the agitators.

Meanwhile, a Congress delegation, led by state unit chief Ashok Chavan, met the Governor in Mumbai Monday afternoon and asked him to instruct the state government to immediately withdraw cases filed against "innocent" agitators during the recent Maratha quota protests.

In a memorandum, the party said the government would be to blame if a decision on the quota issue is not announced immediately and if the law and order situation in the state deteriorates.

The delegation, which also included Leader of Opposition in the Assembly Radhakrishna Vikhe-Patil and former Chief Minister Prithviraj Chavan, accused the state government of dilly-dallying on the issue.

"The position of the BJP and the Shiv Sena over quota is vague. Therefore, no concrete decision has been taken on reservations to Marathas, Muslim, Dhangar, Mahadev Koli and Lingayat communities. The government wants to keep these issues pending," the memorandum said.

"In such a scenario, we urge you to intervene and instruct the government to declare its decisions regarding reservations of these communities without any delay," it added.

The community had earlier taken out silent marches across the state to highlight their demands, prominent among them being that of reservation.

However, their latest round of agitation has taken a violent turn.